As I spoke with the artists at The Glass Bubble Project (see post below), I was reminded how fascinating urban photography is. 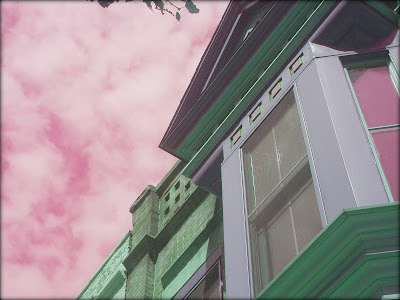 Over the years, I have watched the City of Cleveland flourish as an industrial city and then become a ghost town.  I now see a city with an identity crises, and enjoy cataloging it on my photoblog.  Ever watch the evolution of a neighborhood?  It's art which elevates a neighborhood in decay.  The Novogratzes say it best in their book Downtown Chic.  They say, "Buy the neighborhood, not the house."  They tell you to look where the artists are buying.  Where the artists move, that is where the trendy neighborhood will be, and proof of the power of art to elevate a city.


It's a bittersweet cycle, though.  Let's take the area of W. 25th in Cleveland as an example.  Bad area, you can't walk there at night.  There's a couple of good restaurants because it's right outside of downtown.  But you are risking having your car broken into.  The historic West Side Market is there, and it's one of the great places in Cleveland to visit.  The disparity of wealth in our country is very apparent in this neighborhood.  Rich people as well as homeless people walk the street.  Historically, it was a low cost neighborhood.  The projects are there, and lots of artists.  The artists have made it the cool area it is.  There are new horribly over-priced yuppie condos.  It is convenient to downtown, but only two blocks from the projects.

So here's how it goes.  You have poor people in an area.  The artists move in.  They're poor too, but non-conformists.  They make the area cool.  So the yuppies move in.  It's good because they bring an infusion of cash.  It's bad because they squeeze out the people who need low cost housing (the artists and the poor).  The cash infusion is only temporary.  The urban professionals are young and when it's time to start a family, they buy an SUV and move to the suburbs.  In the meantime, since the artists have moved the neighborhood loses what gave it its character to begin with, so new professionals are not attracted to the area.  It's a waxing and waning cycle that lacks sustainability.

I'm generalizing, of course.  These generalizations are based on my observations of currently-trendy and no-longer trendy neighborhoods in Cleveland.  I may be naive, but I think a lot of poverty in our neighborhoods is caused by a lack of planning and no consideration for sustainability.  I've been reading a lot about intentional communities lately and wonder if this may be the answer to neighborhood cycles.  I wish I had studied architecture when I was young.  I plan to do more writing on alternative, prefab, green and simple housing.  What's your take, dear readers?  Have you seen this type of cycle in an urban neighborhood?  Do you prefer city or country living?  I think I'd like a combination of the two.  I crave trees and water, but I'd also like to live in a neighborhood where I could walk to the farmer's market and the coffee shop, in safety.

Hmmm. Interesting post. We now have three intentional communities in Milwaukee-- an ecovillage, a yoga cooperative and an artist cooperative. I just wrote about the latter: http://tinyurl.com/3z7cb8s

It's an interesting concept!