The Artist as Art - O'Keeffe and Steigletz 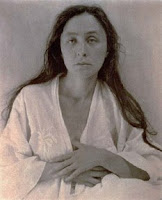 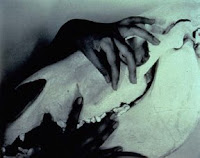 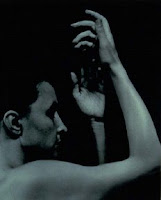 Images from Wadsworth Athenuem.
While the art world was carrying on about Dadaism and Surrealism, there was an equally-influential painter quietly creating a storm in the United States. Her name is Georgia O'Keeffe. O'Keeffe is one of the first artists I fell in love with when I became fascinated with painting. To say that I love her large flowers is cliche, but it's true I do.
But as I read more about O'Keeffe, I became more fascinated with her as a person. She is another example of the artist as art. Always unadorned and unapologetic in appearance, her presence is a fascinating one. Her husband, Alfred Stiegletz, is considered the father of modern photography as an art form.
Stiegletz once gave Georgia the following sage advice about art school. "Learn all you can. Then forget all you learn. What will be left is the best of you." I think, perhaps Stiegletz's influence on the modern world is only beginning to be understood.
Look at the photos he took of Georgia, where she fearlessly posed without makeup, upon awakening and without combing her hair. Her aloof beauty was always evident, even as she aged. Are these unlike the photos that we see in flickr, where brave people share their lives with us each day? What would Alfred think of flickr? I am sure he would be fascinated, as am I. And I am sure he would be proud to know there are so many talented artists all over the world who were influenced by him.
Without Alfred and Georgia there would be no flickr.
Posted by Peggy at 8:20 PM

Georgia O'keefe! happens to be my favourite artist- persona as well! What a coincidence! But didn't know much about Steigletz. Thanx for sharing. And flickr is a 'must experience' for anyone remotely curious about life.

Vineeta,
I didn't know O'Keeffe is your favorite. That's awesome. Do you have any of her prints in your place? She really influenced paintings of florals. I judge all forals by the standard she set, I just can't help it.

When you come to the U.S. for a visit, we should go to the O'Keeffe museum in Chicago. A whole museum devoted to her. Doesn't that sound like heaven?

Georgia. The first artists' work I ever really experienced in that 'speaking to you' way that art can grab you and suck you in. I think that was when I was 10.
As I read and learned more about her and discovered that she happened to be a raging feminist and WAY ahead of her time it made perfect sense that she would be my first artist hero.
There are certain artists whose work I find amazing for it's timelessness, hers being at the top of the list, and I always wonder which of the artists of the now will have pulled off that same trick when we look at their work in 75 more years.

Peggy, thanx for writing about my work & directing me back to this post- Imagine I would have missed your invitation! There's nothing I would like better than to visit the O'keeffe museum with you :) It does sound like heaven :)