I'm about to embark on a painting-a-day project for 30 days. Before I start in this new direction, I wanted to share some old art. 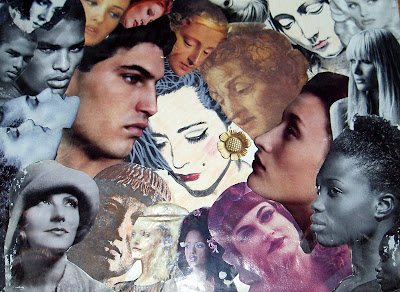 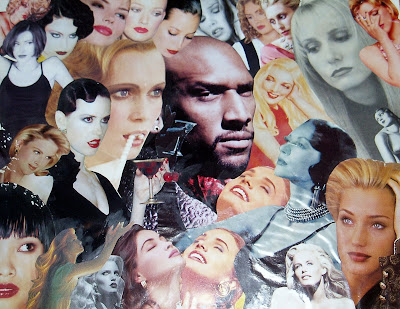 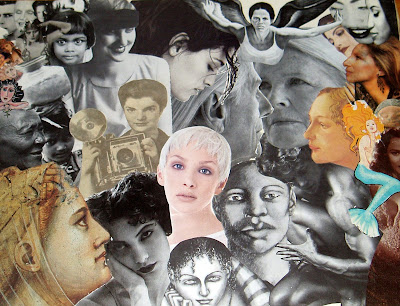 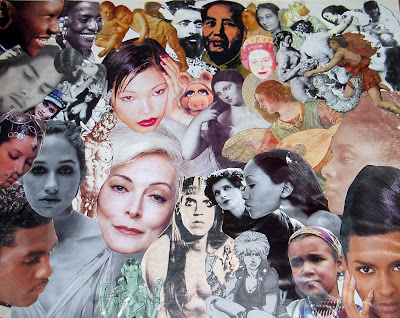 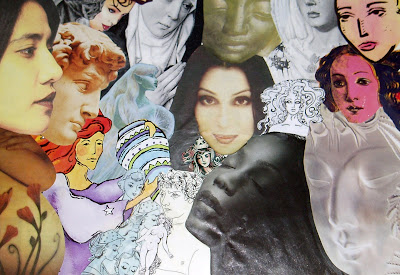 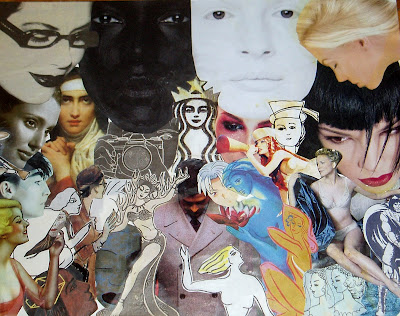 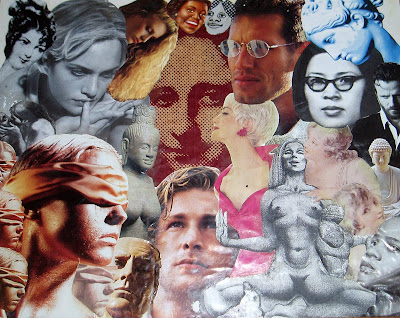 
Each piece is 11" x 14". Faces were found from various sources, including junk mail and a few of my drawings are included.

At the time I was working on these, I vaguely remember a debate going on in the art world about whether collage was an art form. I happily set about making collages ignoring the debate. The answer was obvious to me. I actually began collaging because I was frustrated that I can't draw. I had notebooks full of thumbnails for paintings I wanted to do, I could see the image in my head so clearly, but I just couldn't make my hand cooperate. So I made collages.

This is the first piece of art I exhibited. Cleveland State used to have an unjuried show (meaning anyone who brought a piece could exhibit) every year, called The People's Art Show. These exhibits were the most fascinating I have ever been to. Unfortunately, the show became controversial. Instead of defending free speech (like a good university should), CSU cowardly ended these shows. I heard they were going to resume, but don't know if they did.

I showed this work in 1998. At the time another debate was raging in the art world about the validity of so called "outsider art" or folk art, and whether it was actually valid since it was not scholarly. I happily ignored this debate too. How ridiculous. I have found "outsider art" often to be more visionary than scholarly work. And it doesn't matter to me whether art is "good" or not. What interests me is what people feel compelled to create. The journey is more important than the destination.

As my readers know, I have been very shy about showing my work. The day I submitted the work, I carried it in a big beach bag. There was such a long line, I was too afraid to take it out of the bag. I gave the bag to the curator and said hang it however you'd like. He could see my shyness. He asked me the title of the piece. "Sluts and Goddesses," I said sheepishly. "Far out," his reply.

Opening night was one of the best nights of my life, and took me by surprise. My sister-in-law went with me, and said she didn't realize I was an artist. She has been my greatest supporter ever since. Walking in the door was incredible. My work was on the wall facing the entrance. It was literally in your face as you walked in! The curator chose to hang the work vertically. It was so very powerful seeing my work among the other artists' work. I couldn't believe the strength of the piece.

As an exhibiting artist, I was entitled to a free t-shirt. The woman who gave me my shirt, checked off my name and gushed about how my work spoke to her. Every time I looked over at the piece, there was a crowd around it. One of the best experiences of my life. A true miracle.
Posted by Peggy at 3:21 PM

Email ThisBlogThis!Share to TwitterShare to FacebookShare to Pinterest
Labels: Collage

wow! That's a great story. I am so the same way about my work, I hate showing it. Even my interiors. You know I love collages. :) They are fun, somewhat tricky to make, (they are like a puzzle), and different. So, I think they are art. I totally agree with what you said about the artists. Training, classes, college, etc... can make you better, but a nature artist is a born with the talent. :) Art is Art, just like I feel Design is Design. You might not love everything everyone else does, but it was still designed and created!!! That's what matters.