Work in Progress: A Comic Book! 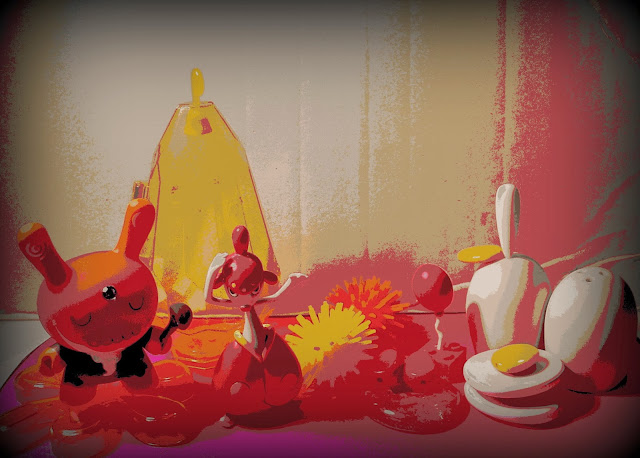 Hello dear readers!  I had a set back and found myself in bed for the last three weeks.  I went through deep moral and philosophical introspection.  A flare up after doing so well, seemed cruel to say the least.  I went through alternating bouts of self pity, especially for facing this illness alone.  I came to contradictory conclusions.  I realized that I don't want to live like this - who does?  But then realized I have no choice.  I will have to learn to live like this.  And I'm not really alone, we will all face this type of illness at some point in our life.  It is not the illness, but rather our reaction to it that is important.  Meaning, I will need to learn to harness my strength, dignity and go on.  What does this mean?  That I'm never going to get better.  That's not a sad statement of resignation, but rather a proclamation of peace and acceptance, a letting go of denial.  In the following days there will be more discussion on this topic, as well as facing chronic illness (and or caretaking of someone who is chronically ill) from a Buddhist perspective.

For now, since I'm behind in blogging, I'd like to show you more art that I've been working on.  I'm a little afraid, since it seems to eccentric.  But, I think I have a track record for putting it all out there, so I'm not going to stop now.

As you know, I've had to find "clean" ways to create.  I create because I must, there's just no other explanation for it.  I can no longer tolerate many of the toxins I dearly love (acrylic, spray paint).  Since everything looks like sculpture to me, I've been enjoying working on various assemblages, many of them temporary, a nod to the Buddhist teaching of impermanence.  Oftentimes, I dismantle the assemblage as soon as it's been photographed.  I've also been incorporating my interest in upcycling and my concern for the over abundance of detritus in the hood.  The comic book will feature various superheroes cleaning up the ghetto, having fun and using recycled materials to make their home sacred and beautiful.

Do you remember my Detritus Robot?  She will be appearing in the comic book, and also in a video I am working on.  The video is painstaking work, however, as I have no idea what I'm doing.  As always, that's too many words.  Art should stand alone, it doesn't need explained.  But we are human, and humans are wired for attempting to make sense of our reality.  For now, here are some proofs from this project.  I'm pretty excited about it.  I started making little worlds and decided to incorporate some of my toy collection 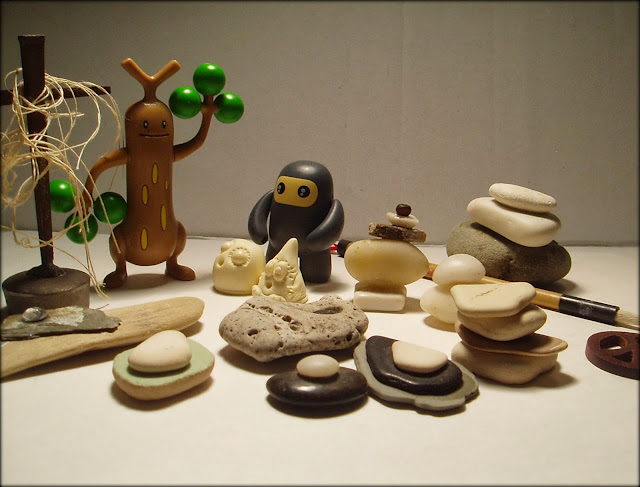 This little world is perhaps the most melancoly, because vestiges of former beauty still remain.  A cross made from copper and nails is a prominent feature.  The twine is an attempt to create wind, like a tumble weed has clung to the cross. 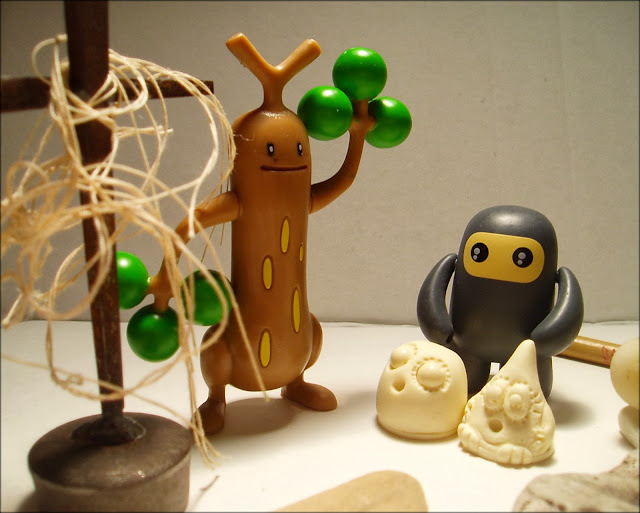 A Pokemon tree-like figure protects the cross and is the last vestige of trees.  Two little aliens admire the cross and are protected by a ninja.  Credits:  Pokemon Sudowoodo.  Little clay aliens by Robert A. Krause of RAK Graphics.  Ninja by Shawnimals for Kidrobot. 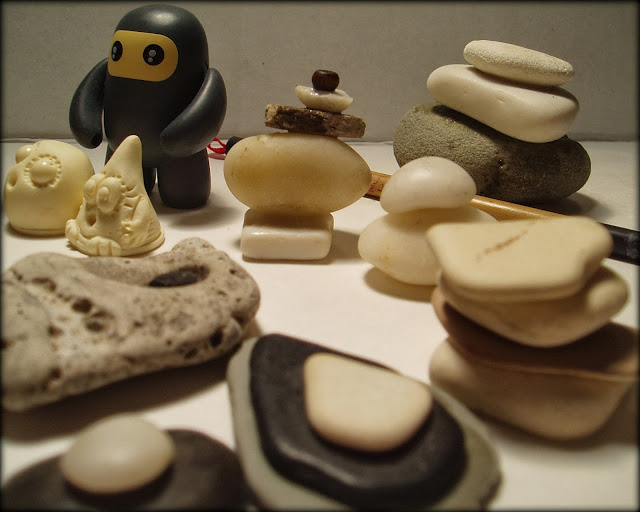 I felt like the rock assemblages by the Ninja needed to be larger and more Suessian in nature. 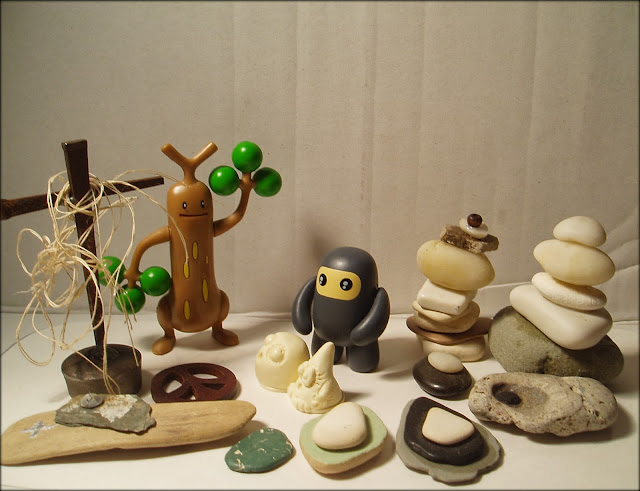 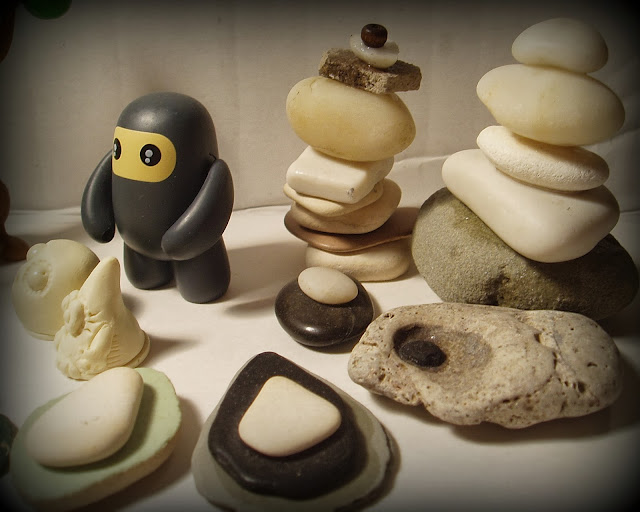 I'm hooked.  I can't stop looking for rocks to pile on top of each other. 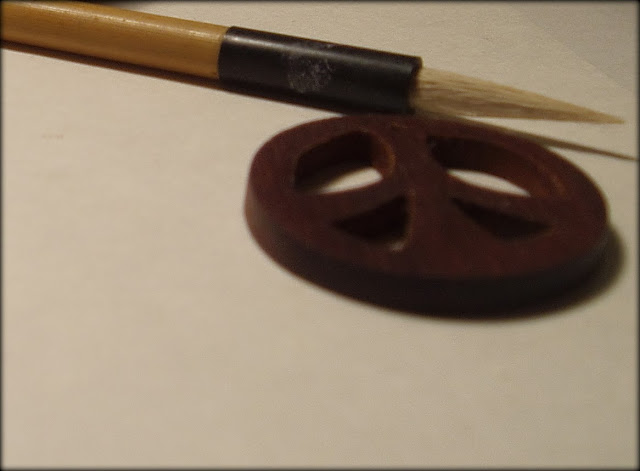 A vintage Japanese paint brush seemed to fit, as well as a broken peace sign earring.  We can paint a better world. 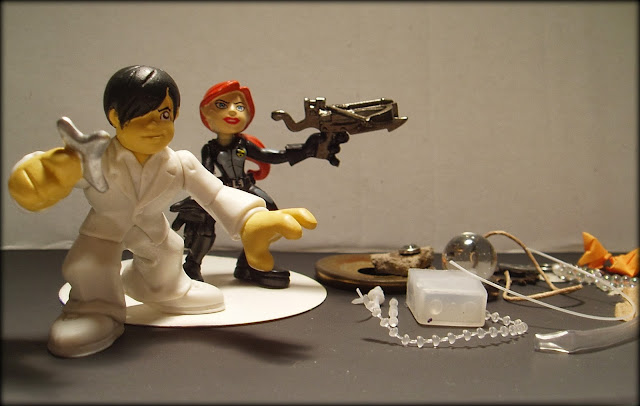 GI Joe and his troops are called in to fight the apathy of non-sustainability.  It takes agility to navigate this dark world, so they call in a floating, spinning yogi. 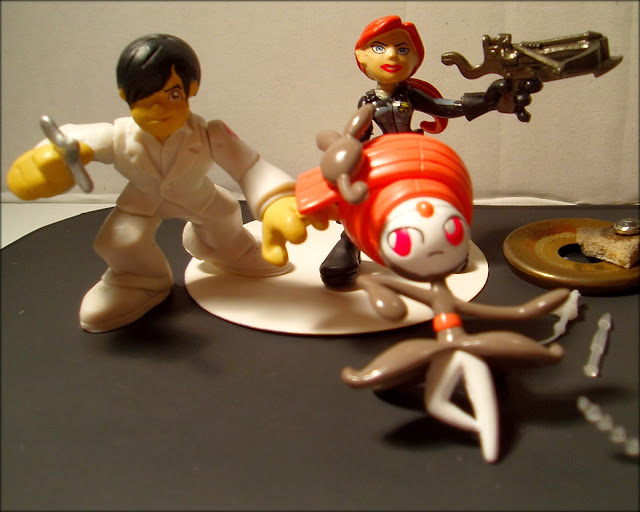 Scarlett does not use her archery skills to kill, but rather to pick up large amounts of detritus, The dancing, spinning Pokemon uses his skills to create large piles of sculpture like debris, easing the Special Forces' ability to move.  The debris is bundled in easy-to-transport packages, and shipped to the upcycling planet. 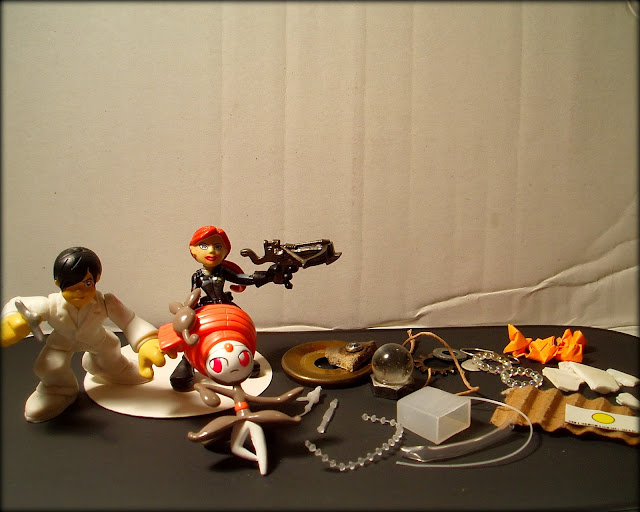 If you are a toy collector, Pokemon figures are very intriguing.  New characters are always being created, so your collection can never be complete.  This figure is relatively new, and is one of my favorites.  His name is Meloetta-Piroutte. 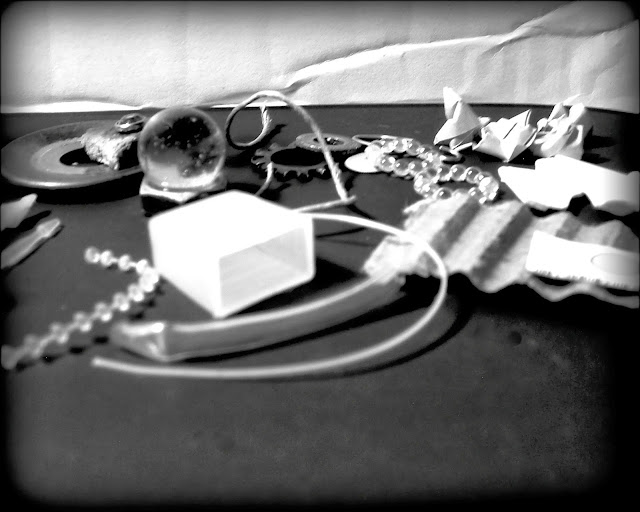 Third World, Where Detritus Is Upcycled 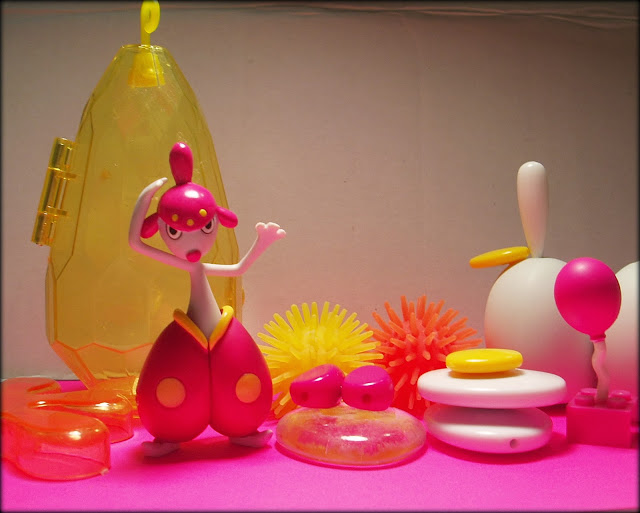 On this world, another Pokeman spins beauty out of the detritus the Special Forces have delivered.  Here, beautiful and functional objects await delivery to other worlds. 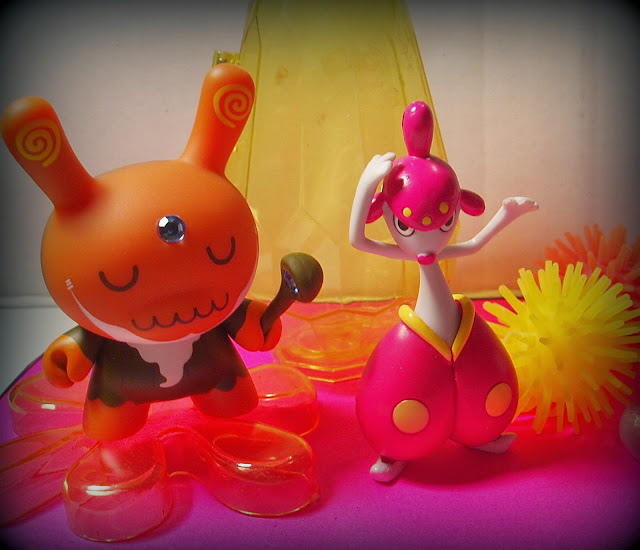 Overseeing the work of the Pokeman is the wise teacher of Ninjas.  He is able to move around easily on his flotation device made of a pencil sharpener.  On this upcycling world, they have learned to navigate the plasma energy easily, rendering most forms of transportation obsolete. 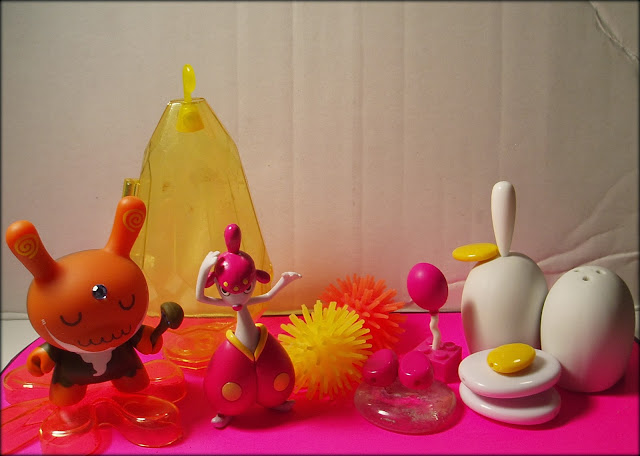 Each object on this planet is designed for beauty, and has a function which aids in sustainability.  Objects are disseminated to planets with populations who need the product.  There is no hoarding.  Since objects are disseminated according to need, there is no exchange of currency.  Credits:  Dunny Series 2009 by Shawnimal;  not sure the name of this Pokemon, will ask my nephew and update. 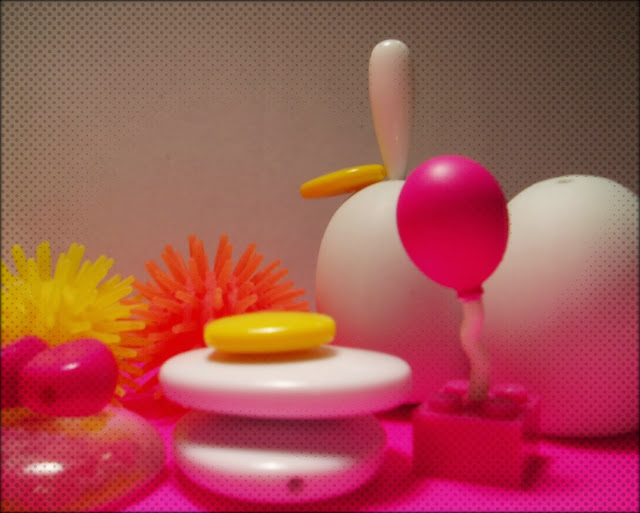 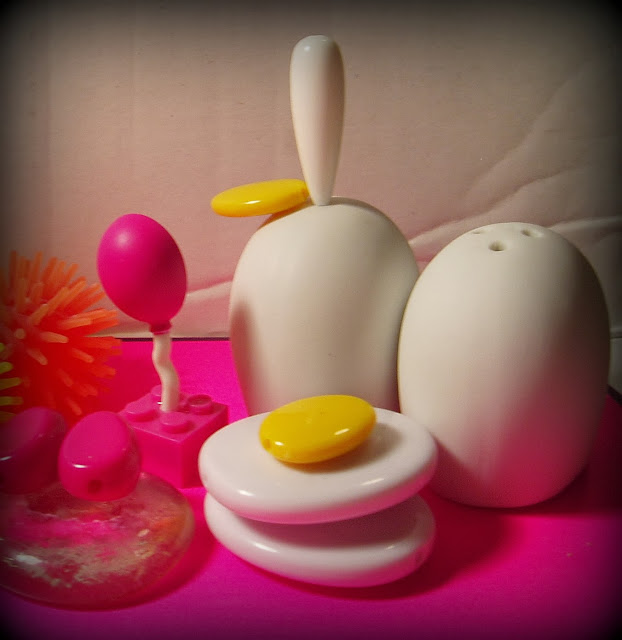 Originally I intended this work to be an installation piece, but I love the idea of a comic book.  That's my first installment.  Stay tuned for more.

All photos by Peggy.
Posted by Peggy at 1:22 PM

Thank you for sharing your creativity! I really appreciate you acting on your ideas. Its not traditional which is inspiring to see!