My posts are not necessarily  in chronological order, but it doesn't really matter. The stories are true. I felt as if Denver gave me a big welcoming hug upon my arrival. 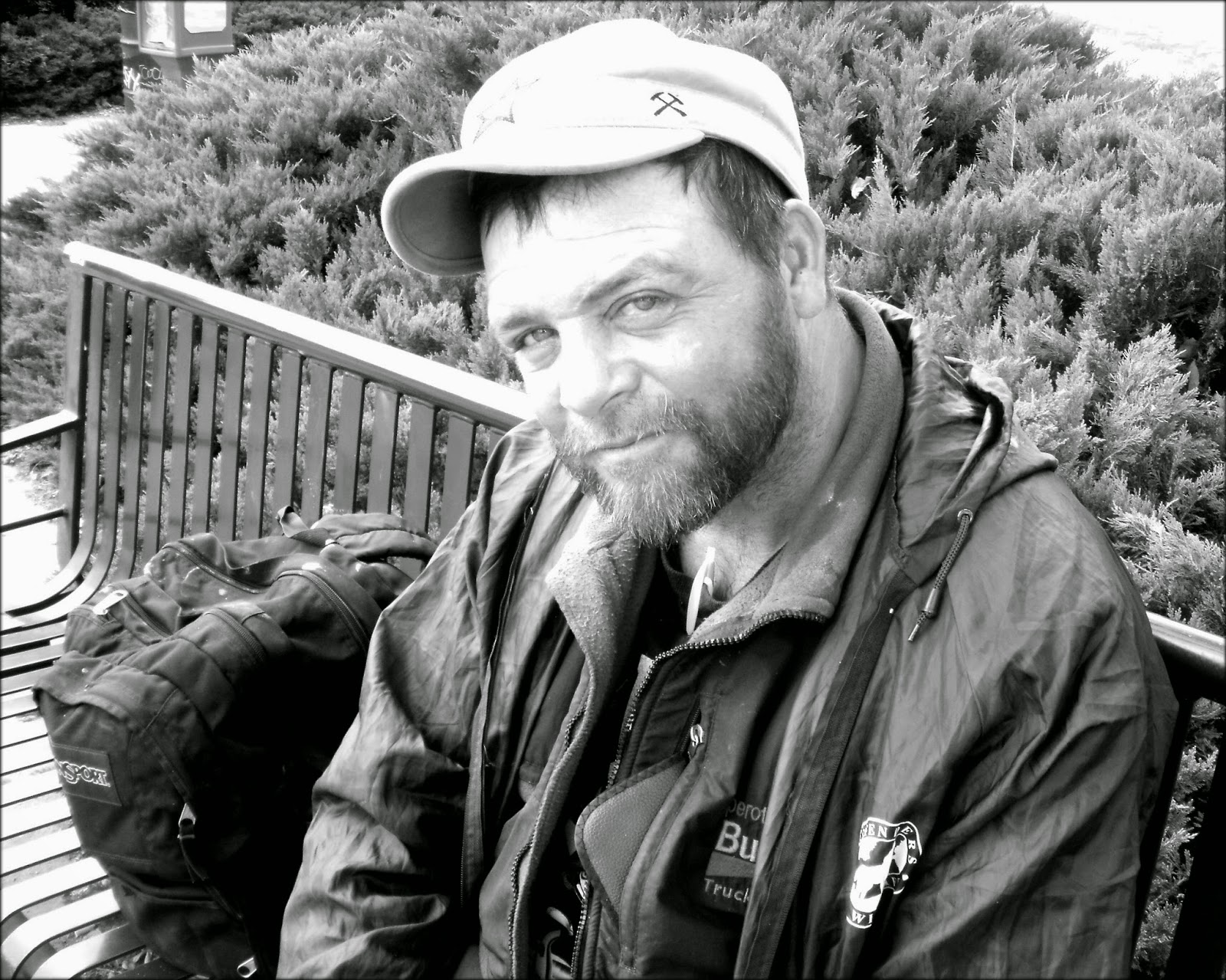 Meet John Elway's new press secretary.  He had just arrived, and he was one of the first people I met when I started exploring. BTW - John Elway is a big local hero. I heard him being talked about constantly by locals and tourists and saw posters of him everywhere, including at the airport.  I'm dating myself, but I remember him being the nemesis of the Cleveland Browns back in the day of Bernie Kosar and Marty Schottenheimer. We almost made it to the Super Bowl, until the fumble heard around the world. I remember that fumble clearly. We all cried. That's when I gave up football......

Sorry, I digress.  So dude told me he just arrived because John Elway had been arrested and his services were needed to spin the story and repair John's image. Apparently he's a master spinner.

Yeah, dude was talking shit. But he was pleasant, funny and welcoming. He had twinkly eyes and a contagious smile and laugh.  And here's something funny:  he was clean.  In fact, this was something I noticed about the homeless and transients in general. They look nothing like the Cleveland or Akron transients. They are much cleaner, have better clothes, better shoes. 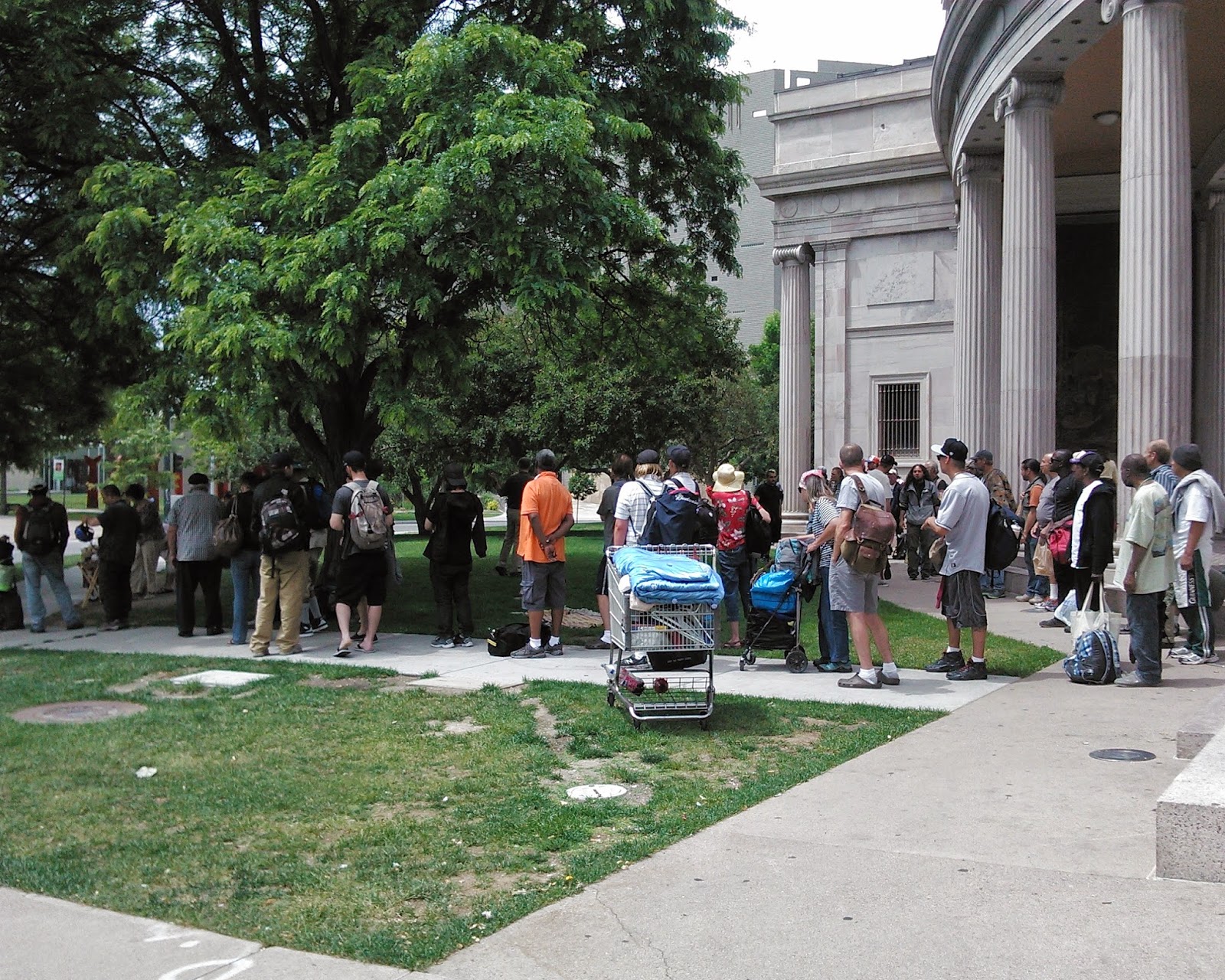 See what I mean?  This is Capital Hill.  There were people from a social agency passing out food, blankets, clothes, shoes, backpacks, water, etc.  I'll try to get you a pic from a soup line in Cleveland to give you a comparison.  I'll tell you what else was refreshing about Mr. Press Secretary. He didn't ask me for money. Of course, a lot of people asked me for money since I had the large neon sign on my forehead that said: TOURIST. But it's okay, I can handle myself. I'll have more to say about poverty in a subsequent post. 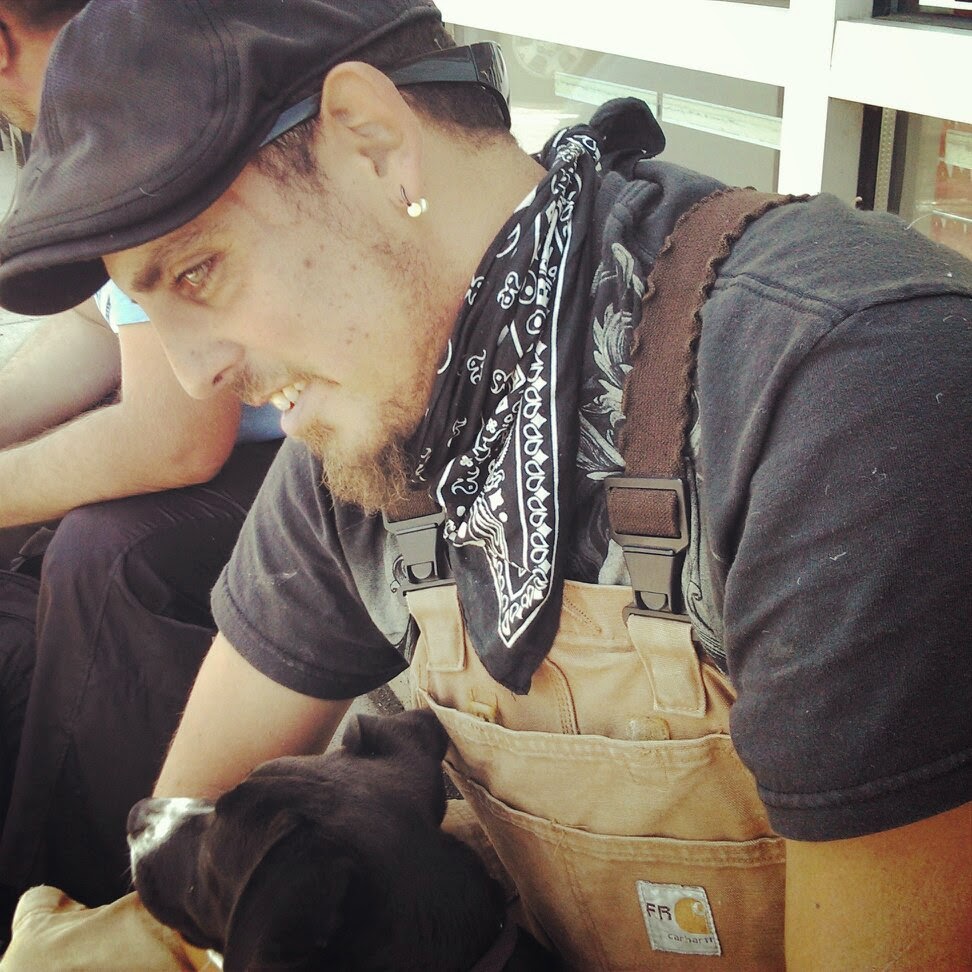 By the dollar store I met a couple of good ol' boys from Alabama (their expression, not mine). I wanted to pet the dude's puppy. I approached and gently asked if it was okay to put his pup - you never know pup might be in training. He said in a drawl, "Why sure lil lady, and thanks for asking."  He explained that people approach the pup without asking him first and she doesn't like that.

This guy had the most riveting eyes I've ever seen. He told me he and his buddy had hopped a train from Alabama (I wish I had recorded his voice for you to hear). He said they had no choice. There were no jobs. Alabama (like Ohio) is broke so there's no welfare. He told me he was strong as an ox and wanted to work and that he found an agency like Minute Men, except they don't take a cut of the workers' pay. It's more like a social agency. He also said he doesn't like to give people money unless he can see they are trying to help themselves. Heard that.


I had nothing but mad respect for him. He said he and his dude hopped a train. Slept in the woods at night, and the pup alerted him if any one approached. We talked little about the myths the wealthy like to perpetuate:  1. The Safety Net.  No such thing, doesn't exist.  2. The Free Ride. Again, this is bullshit, it doesn't exist. and 3. That people are lazy and don't want to work.  Also bullshit.  See also post below where I talk about the guy who was putting scrap metal in his car. He's been accused of being lazy.

He told me, hey you do what you gotta do and for a young, strong buck like him that means going where the opportunity is. 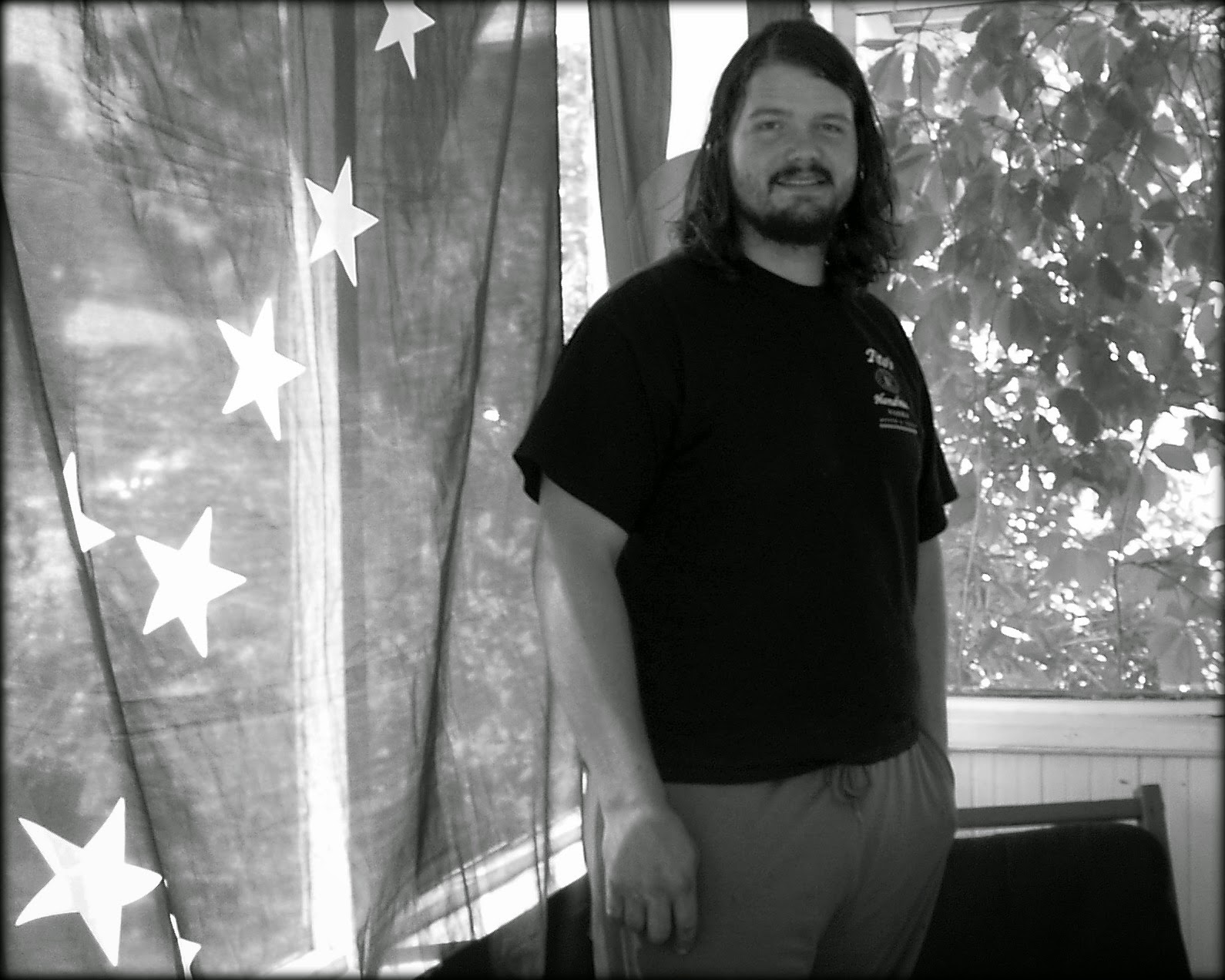 Meet Jacob. The story of Jacob is one of synchronicity and mad hospitality. In our search for another lounge, we ended up at the wrong address. He was working in his garden, so I approached. His three legged, rescue pit bull greet me warmly, so the dude knew I was cool  I chatted him up a bit. He said, "Oh are you tourists looking for a place to smoke?"  Indeed. You're welcome to smoke on my porch. I asked our cab driver to come back in an hour. I thought I had died and gone to heaven.

Again we passed the peace pipe - something we did often in Denver. He shared an out of this world bud with us and we shared one with him. Turns out dude is a chemist and was explaining a lot about strands, and growing methods and something called cytokines. There's a whole science to picking the strand for your physiology. It was good not to feel any pain. We'll get more into medical implications in a subsequent post.

We sat on the porch, smoked, talked and admired his beautiful rose bushes. Turned out his girlfriend was in Cleveland.  Small world. He talked a little about Cleveland, and mentioned the brutal killing of a woman by the cops. Turns out that's my step mom's niece he was talking about. Small world.

A cop drove by.  Out of habit, we hid our joints.  He said, you don't have to do that, it's legal here. He explained the police department was right across the street from him and that he was friends with the local sheriff.  I laughed, kinda like Andy Griffith, I said.  He said, funny. The name of the 'burb we were in was Mayberry.  I'm not shitting you.  That's how the trip was, nothing but synchronicity.

Jacob is an intellectual, and I love talking to intellectuals. It was a great experience that I will never forget. 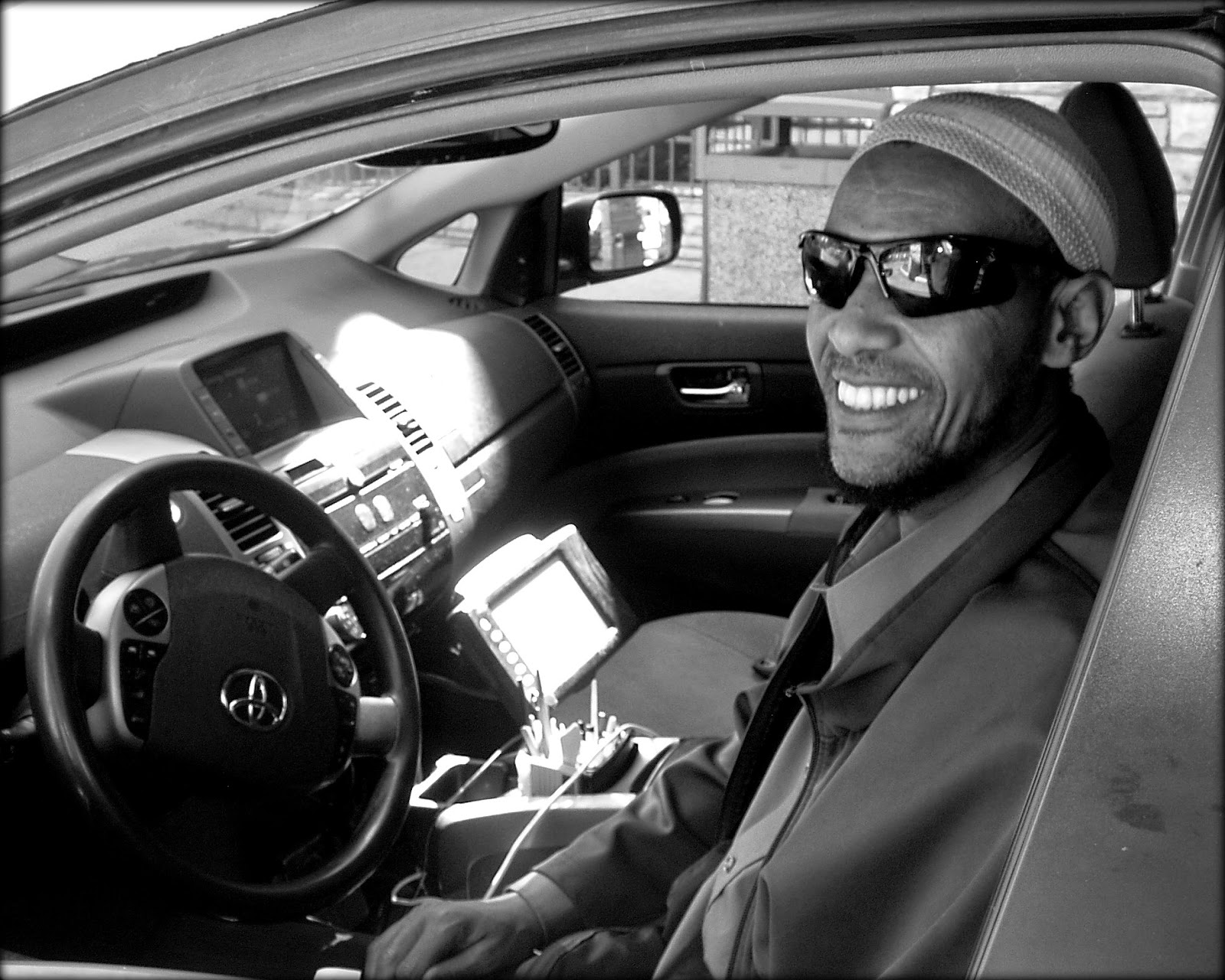 Meet Yubo. Yubo is one of our kind cab drivers. Since we were smoking, and didn't have a lot of time in Denver, we cabbed it a lot. Cab drivers are great. I love hearing their story, and I learned a lot about the city. They are really ambassadors. Yubo was a gentleman, and really watched my back to make sure I was safe. He arrived at Jacob's house 59 minutes later. He was there right when we were ready to leave. Didn't want to wear out our welcome, and we still had a lot to see. Hugs and love all around.

He said he first arrived in Columbus, Ohio. People were cruel and intolerant (I have family there. The dude is not lying). So he left. Didn't waste time. Went a couple other places. If it wasn't right, he left. He finally settled in the Colorado mountains and he loves it. My next trip will be all about the mountains.

Think for a minute about this bravery. Okay, imagine you are an average American. Meaning you watch a lot of TV. You speak only English. You decide to move to Nigeria and start driving a cab to support yourself while you find a place to settle. I don't know about you, but I couldn't do it. I Yubo, and others like him deserve props.  To be continued.......


All words and images by Peggy. Not to be used or reproduced in any manner without express permission.

Email ThisBlogThis!Share to TwitterShare to FacebookShare to Pinterest
Labels: Denver, life, peeps, THE RELUCTANT ACTIVIST, travel, We are the 99%

I HATE OHIO. Every time I go back my skin crawls now. I feel trapped and surrounded by non-compassionate people who care about no one but themselves. :( What a great time you had meeting strangers can be so fun and exciting. People are just so different as you get away from the mid-west.