Denver, Part Two: The Coolest Peeps You're Ever Gonna Meet....


I headed out to explore Colfax and was immediately transfixed. The heady aroma from weed coupled with the mountain air was exquisite. Although it was too friggin' hot, just like Ohio. I had to stay in the shade and keep hydrated. Every time a breeze went by or a door opened, I breathed deeply of the scent. Ahh, just like walking into a coffee shop or a bread shop, only better. It's hard to explain what the smell of real quality weed smells like. It's like a home made spaghetti sauce that has been simmering and exuding its aromas all day. No that's not quite right. It's like a very fine tea that has been steeped to perfection. No that's not quite right. It's a lovely herbal smell. It's scintillating and very heady. There's a reason the indigenous people of this land passed around a peace pipe. It's because the herb - good herb - not the skunk shit you get in Ohio since it's illegal - is a gift from the planet. That's right it's grown. You don't need Prozac. Weed will do you right. You don't need sleeping pills, weed will do you right. There's a lot of money to be made in the weed industry if we do it right. And Denver is doing it right. But also, there's money to be lost by greedy factions that are destroying the economy (like the pharmaceutical industry). Weed just might be the great equalizer. 'Cause let's face it, the disparity of wealth in this country is part of the problem with the economy. You have to share the wealth and spread it around for a healthy economy. Right now a few fearful out-of-touch people are hoarding the wealth. But sorry folks, those days are soon over. And there's nothing to fear. There's plenty to go around. Just go with the flow. 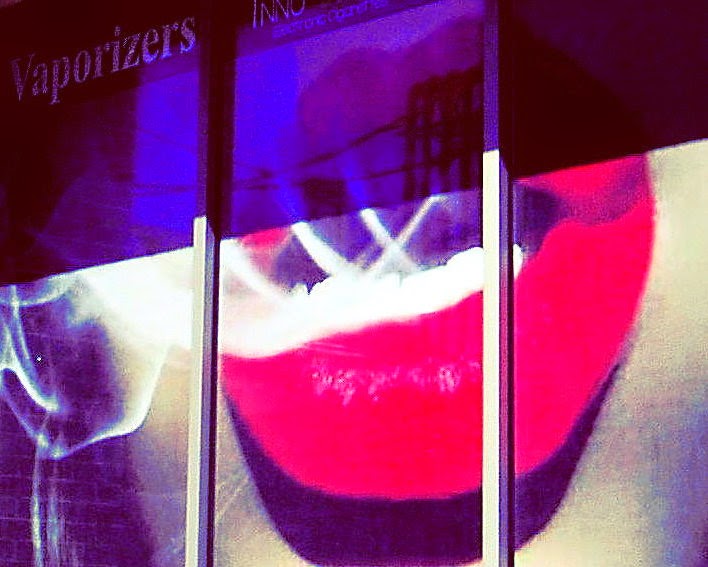 That's exactly what we did in Denver. We went with the flow and went wherever the cosmos directed us. Man it's great to travel without a plan. Such freedom! At first we were afraid to talk to people about weed. I felt like a defector or as if I had just left East Berlin. I found myself whispering the way I do in Ohio. I'm not shitting you. Everyone reminded me I was not breaking the law and that I could speak freely.  Huh. Speak freely. What a concept. I thought the First Amendment guaranteed that...I have some things to say about the legalities and logistics, but that's for a post in the near future. Right now I want to talk about some of the fabulous peeps I met. 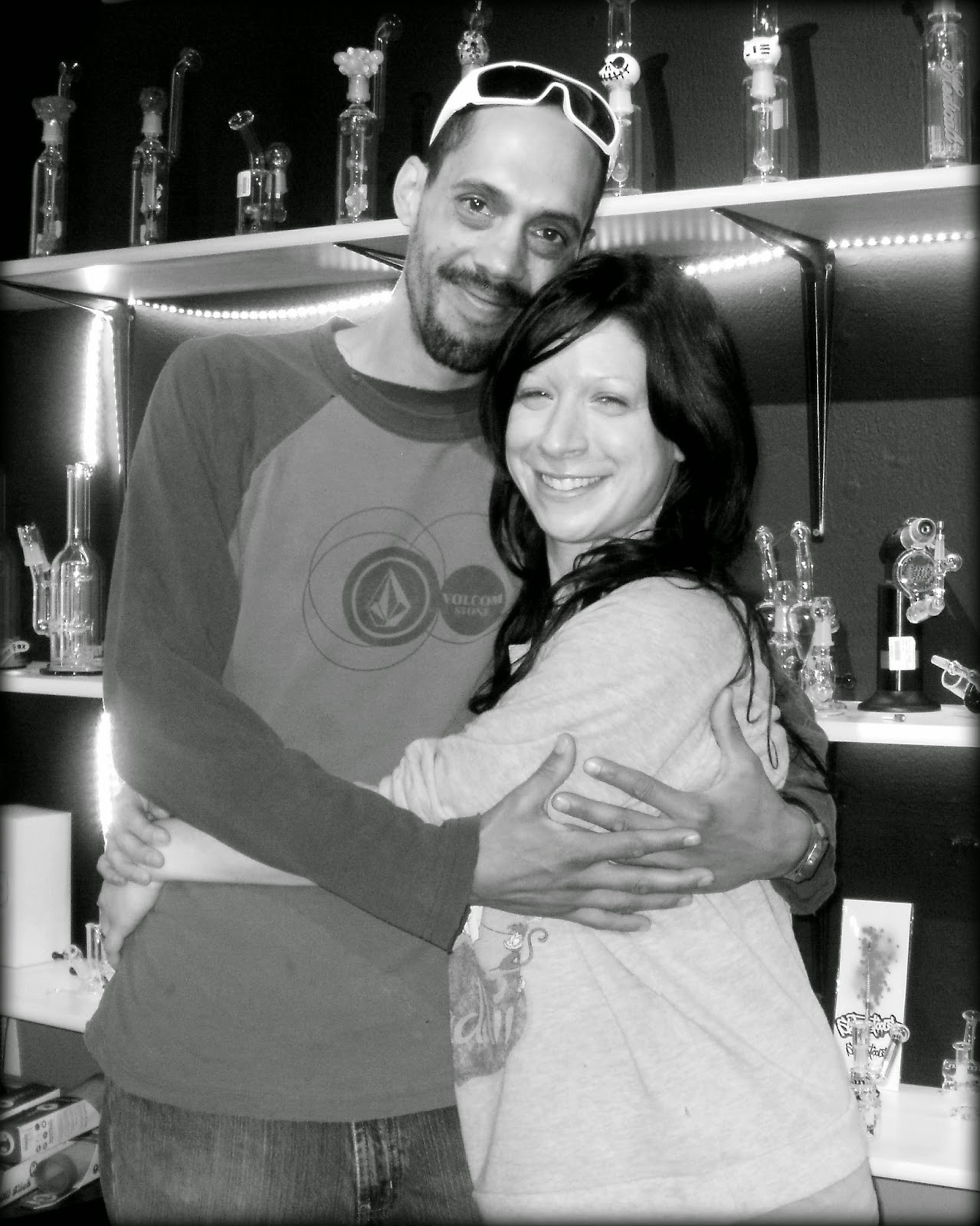 The first place we stopped at was called Purple Haze. It was right across the street from a dispensary. We met a couple of the owners, a lovely couple named Rubin and Stacy. They are ambassadors for Denver. The city should be paying them. They spent a lot of time telling us where to buy smoke, where to buy vaporizers, educating us on the geography of the city and showing us their beautiful, hand blown bongs. And coincidentally, it was Stacy's and my traveling companion's birthdays! It was hugs and laughter all around! Both Rubin and Stacy were articulate, friendly and welcoming. 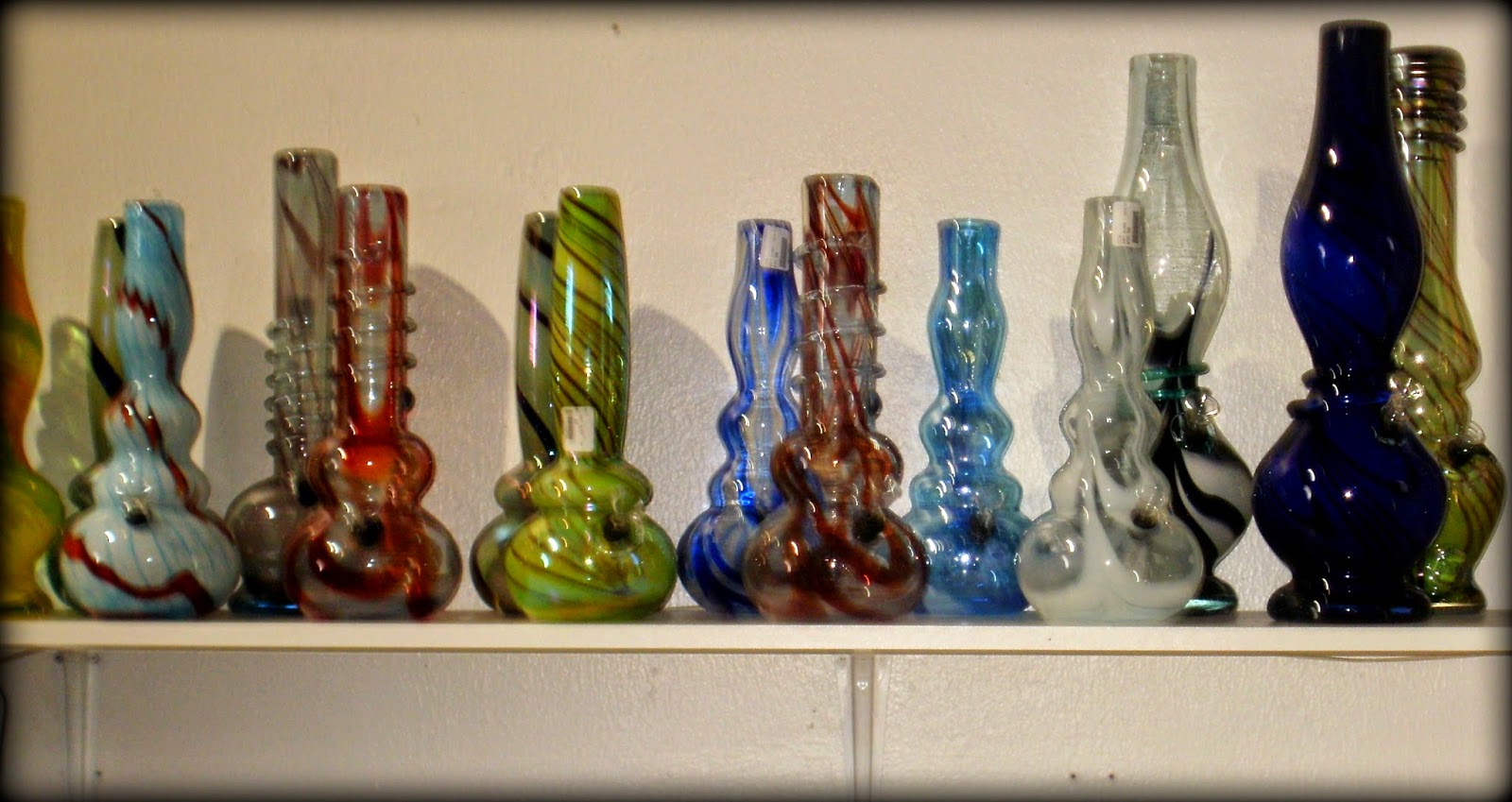 I was amazed at the beautiful bongs! They are all hand blown!  Reminded me a lot of Seattle, where you see hand blown glass everywhere. I wouldn't even use these they are so gorgeous. 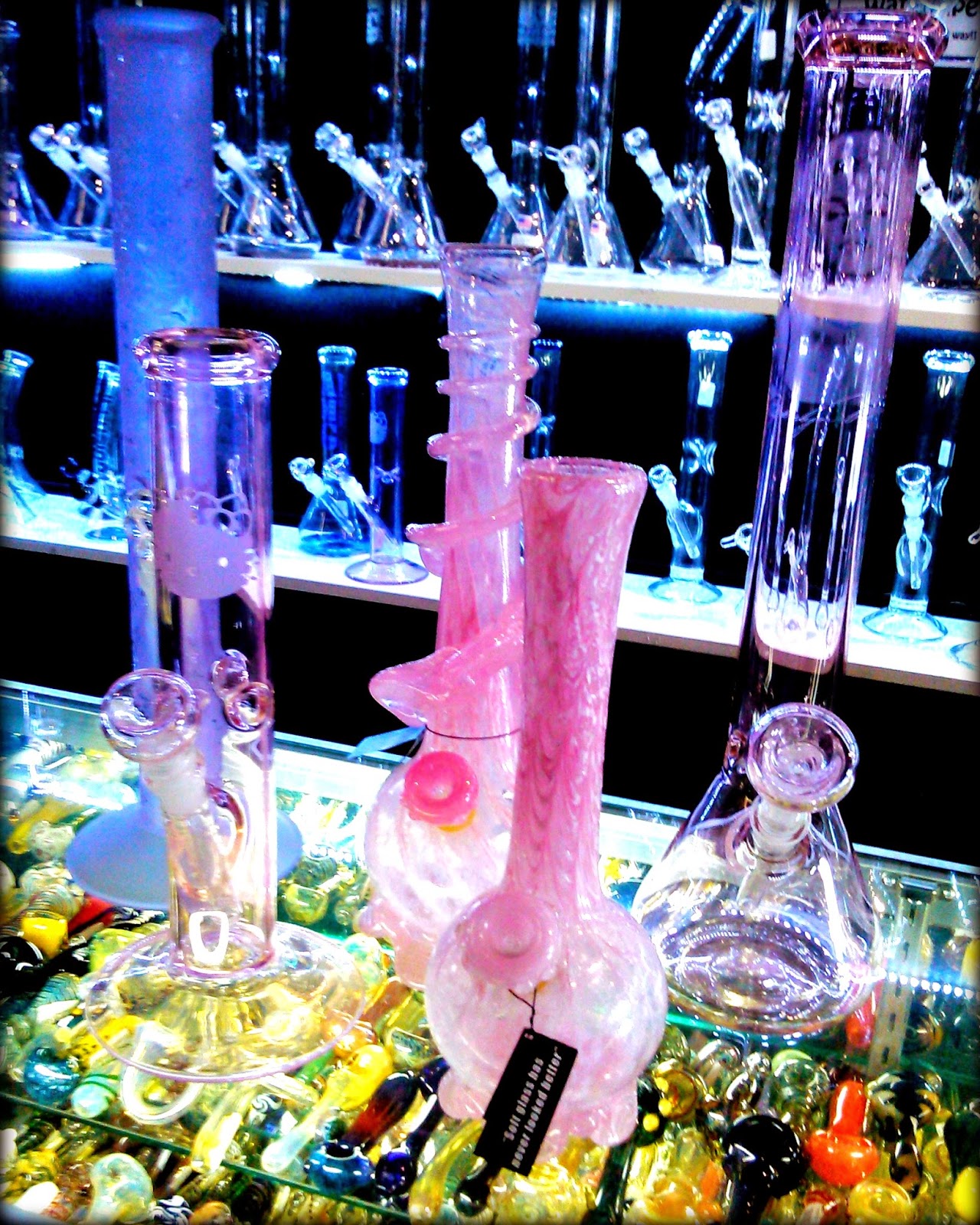 Stacy was kind enough to show me all the pink bongs they had!  Drool!  I can never find modern, pink art glass. I wanted that one in front, but you can't take paraphernalia in the airport - they will put your ass in jail. You can't own paraphernalia in Ohio - they will put your ass in jail. No lie. I swear I stepped into an alternative reality. Our lovely ambassadors told us we didn't need to be afraid to speak about smoking weed. It's legal. It took a while for it to sink in. And it took a while for me to stop whispering. 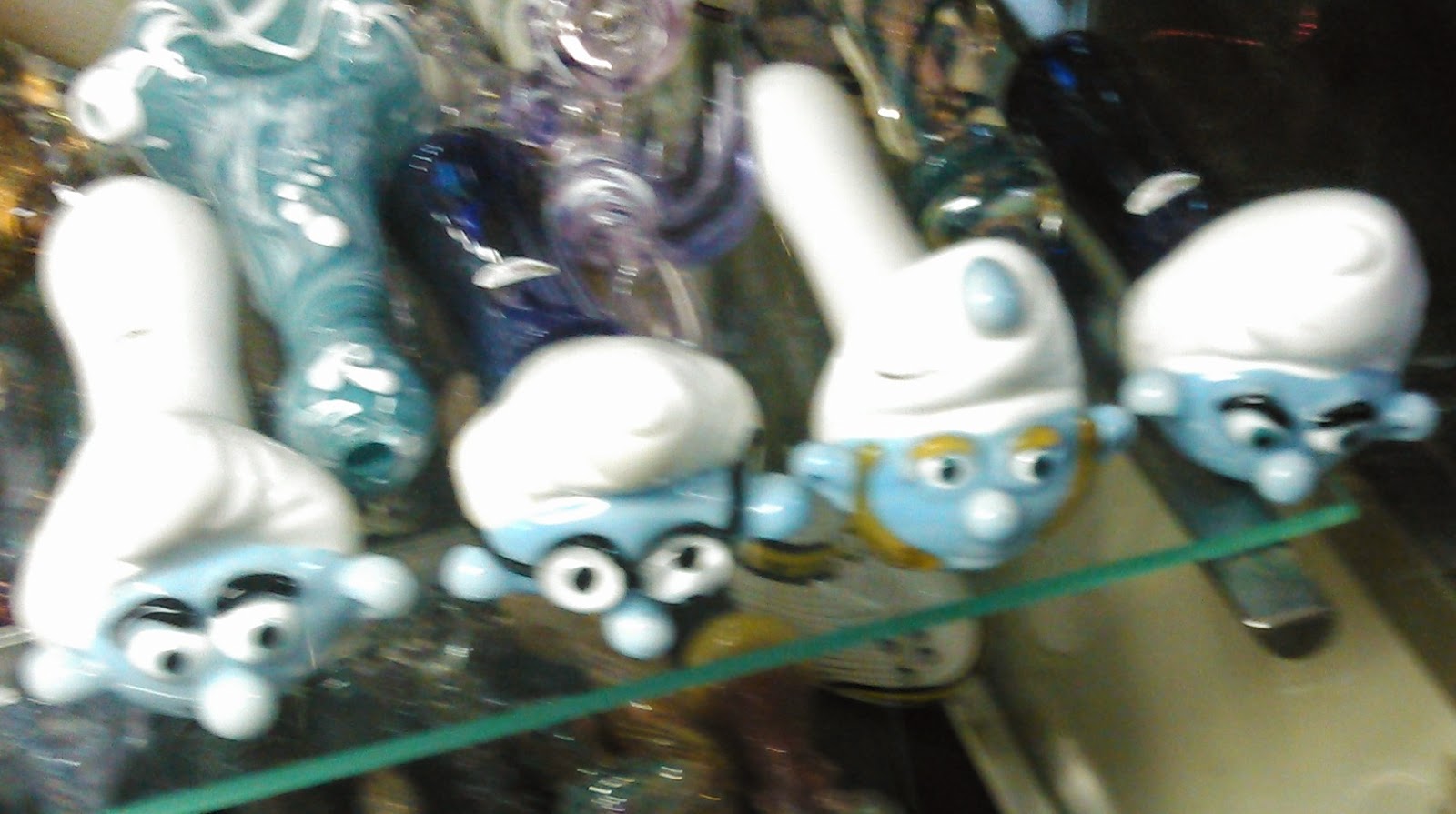 They even had smurf pipes! Sorry for some of the poor quality of my photos - some of my photos were done on the down low, at first I couldn't wrap my mind around that it's legal. Now there's lots of fine points to the law, which I will get into in another post.

Stacy and Rubin gave us a recommendation for the dispensary right across the street. Isn't it ironic that the dispensary is right next to a liquor store? It is the ultimate contradiction that liquor is legal, and weed is not. Drunk drivers kill people every day. Rape and violence is usually alcohol related. Not pot related. Pot makes you chill. The only thing pot smokers kill is a pizza. 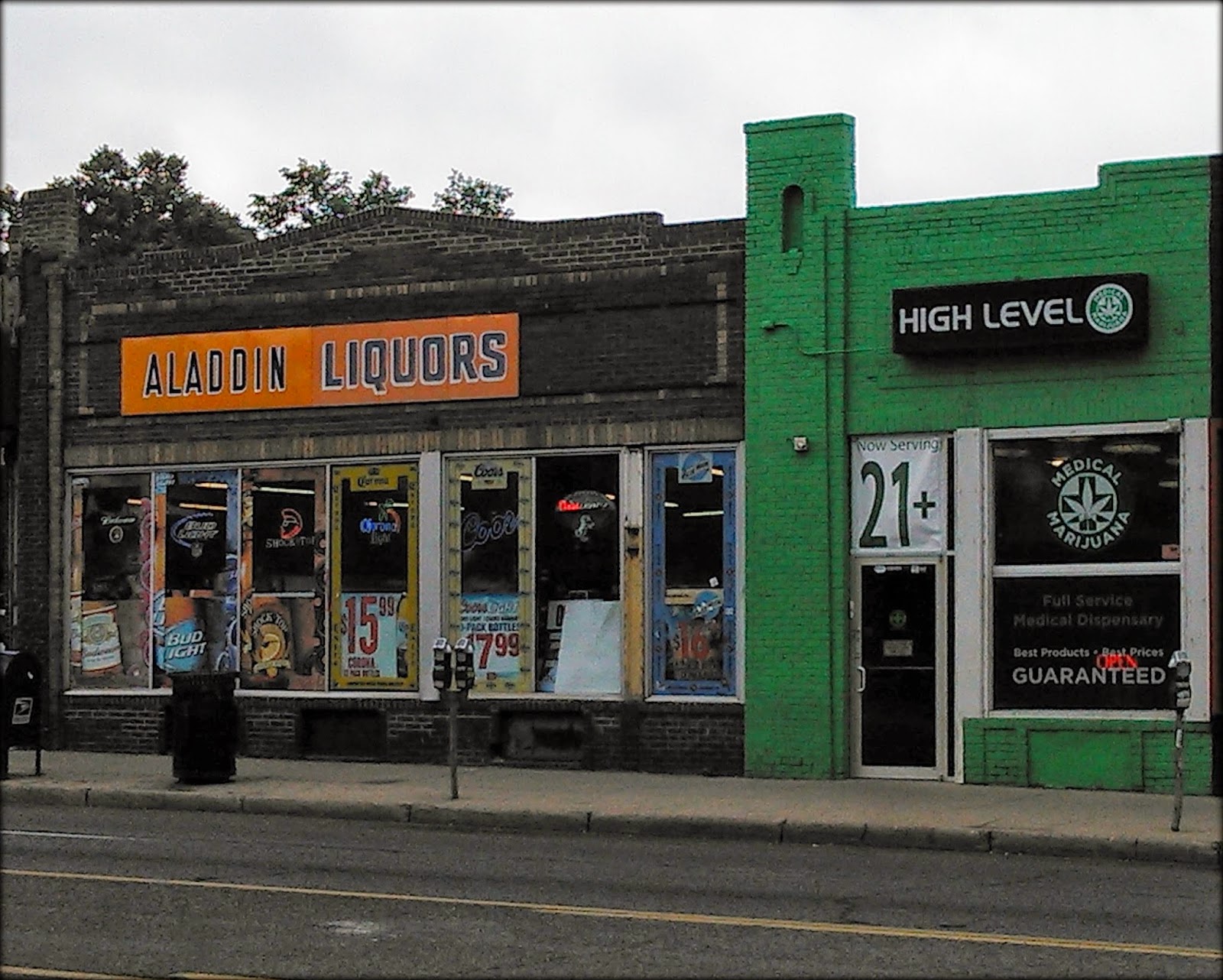 So we ventured into High Level. The smell was, like I've said, heaven on Earth!  Just like walking into Starbucks...well even better than that. It was a pleasure to walk in there and just breathe. 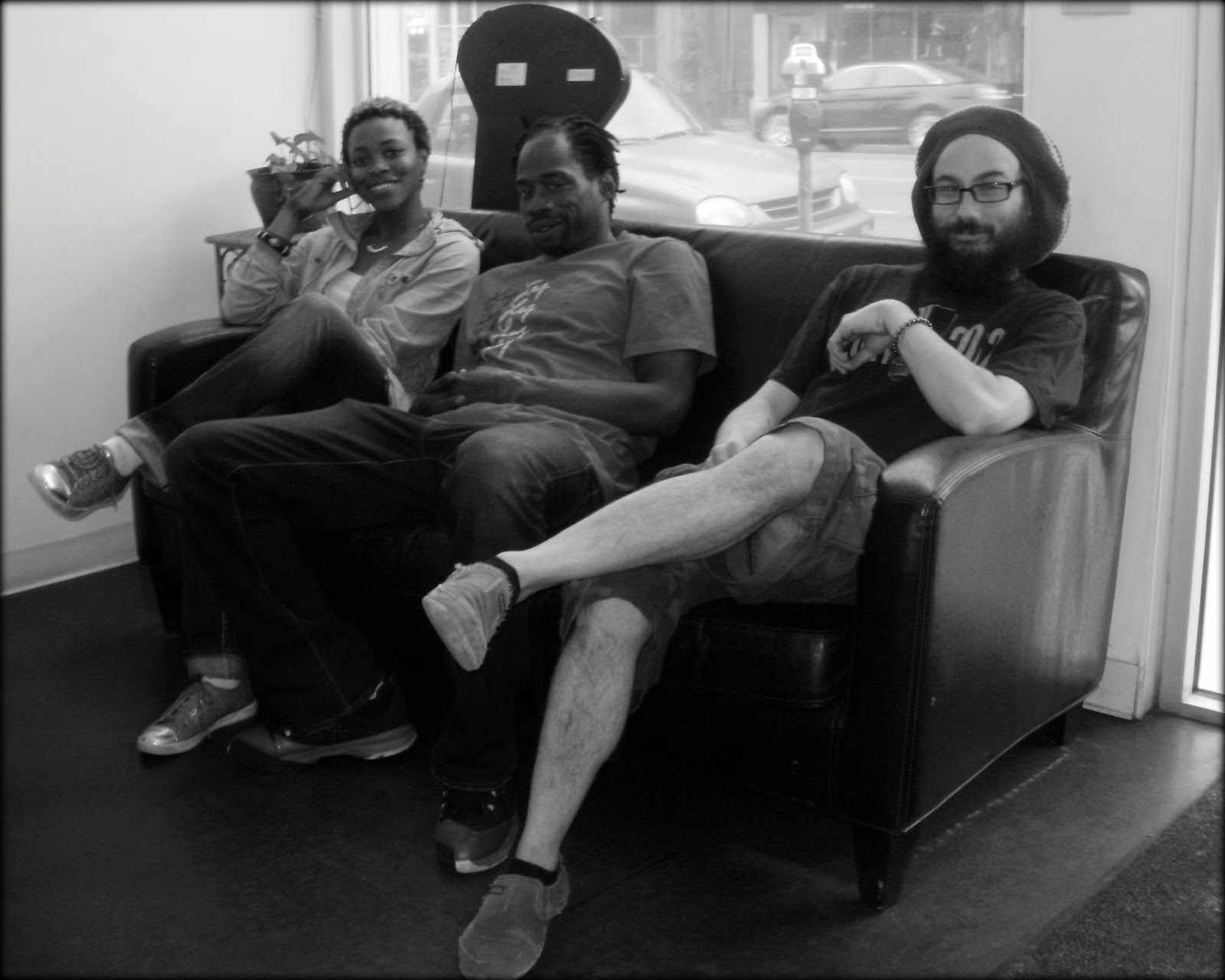 Funny thing about me and my camera. When I get into my Austin Powers mode, almost anyone will let me photograph them and will give me some good face. It's fun, a lot of laughs and all about love. The lovely lady to the left is named Diva, and she's a fashion designer. Gosh, I think I lost her link. As I told you I was still learning to use my Android, so I was a bit disorganized. I'll catch her on my next trip. She was a doll. 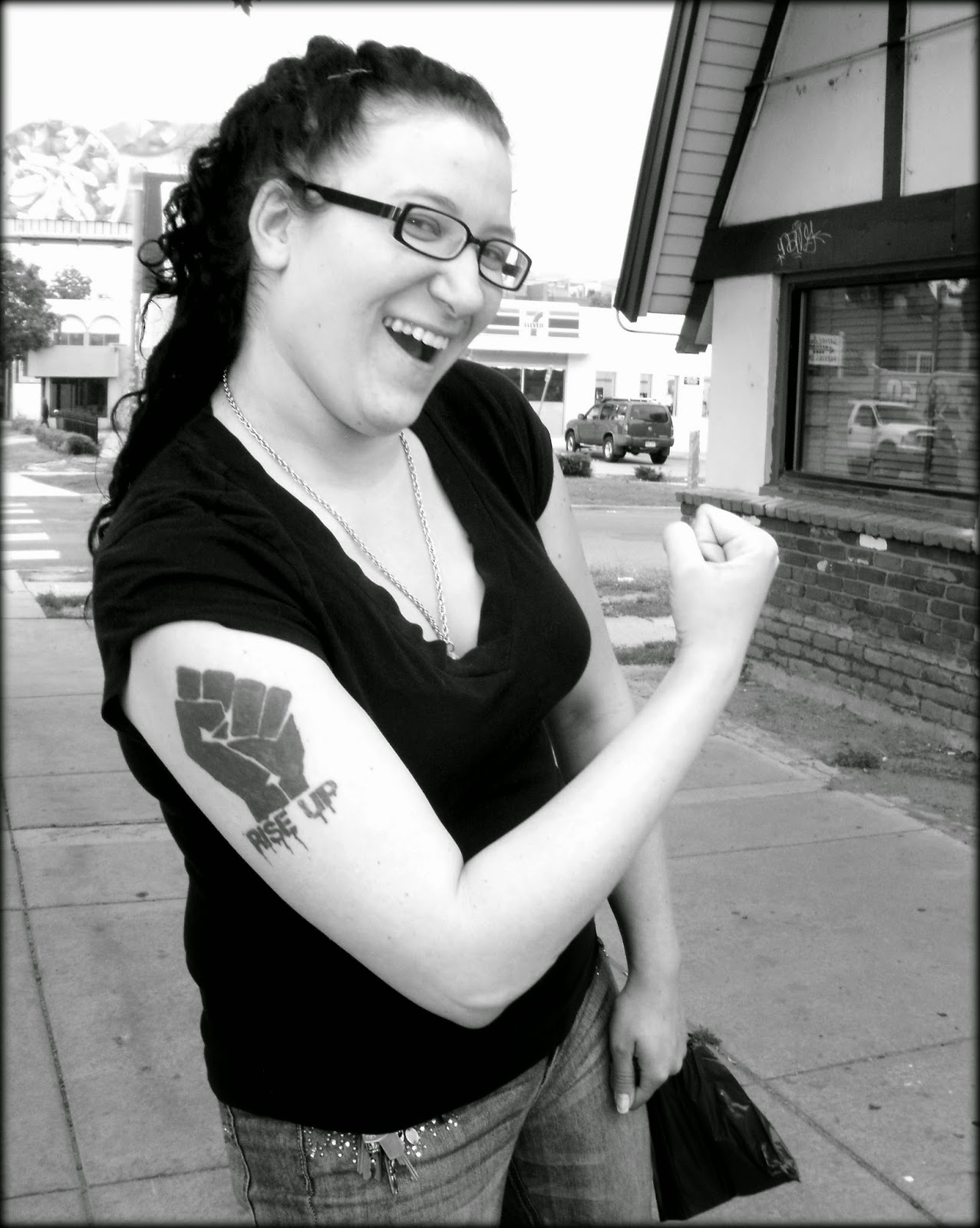 As I crossed the street, I met this fabulous lady. She took part in the Occupy Movement for two years. I congratulated her on her bravery and thanked her. We arm chair activists owe the various Occupy Movements a huge debt of gratitude, but the work isn't over. She told me the experience changed her life. I bet. I love meeting a young person who can think critically. She was a doll. And I got another big hug. I remember reading one time that the average human needs eight hugs a day just to maintain balance. More are needed if creative growth is being attempted. Man, I'm in a huge deficit. But I was making up for it in Denver. Now we needed to find a discrete place to smoke. We had signed a statement at our hotel that we would not smoke in our room. That's cool, I don't mind a non-smoking policy. Hey, I don't want to breathe tobacco.  I'm cool with being discrete and polite. I'd like to see this experiment succeed.

The lovely folks at Purple Haze, gave us the address of a lounge where we could smoke and let us sit in their lobby while we waited for our cab. 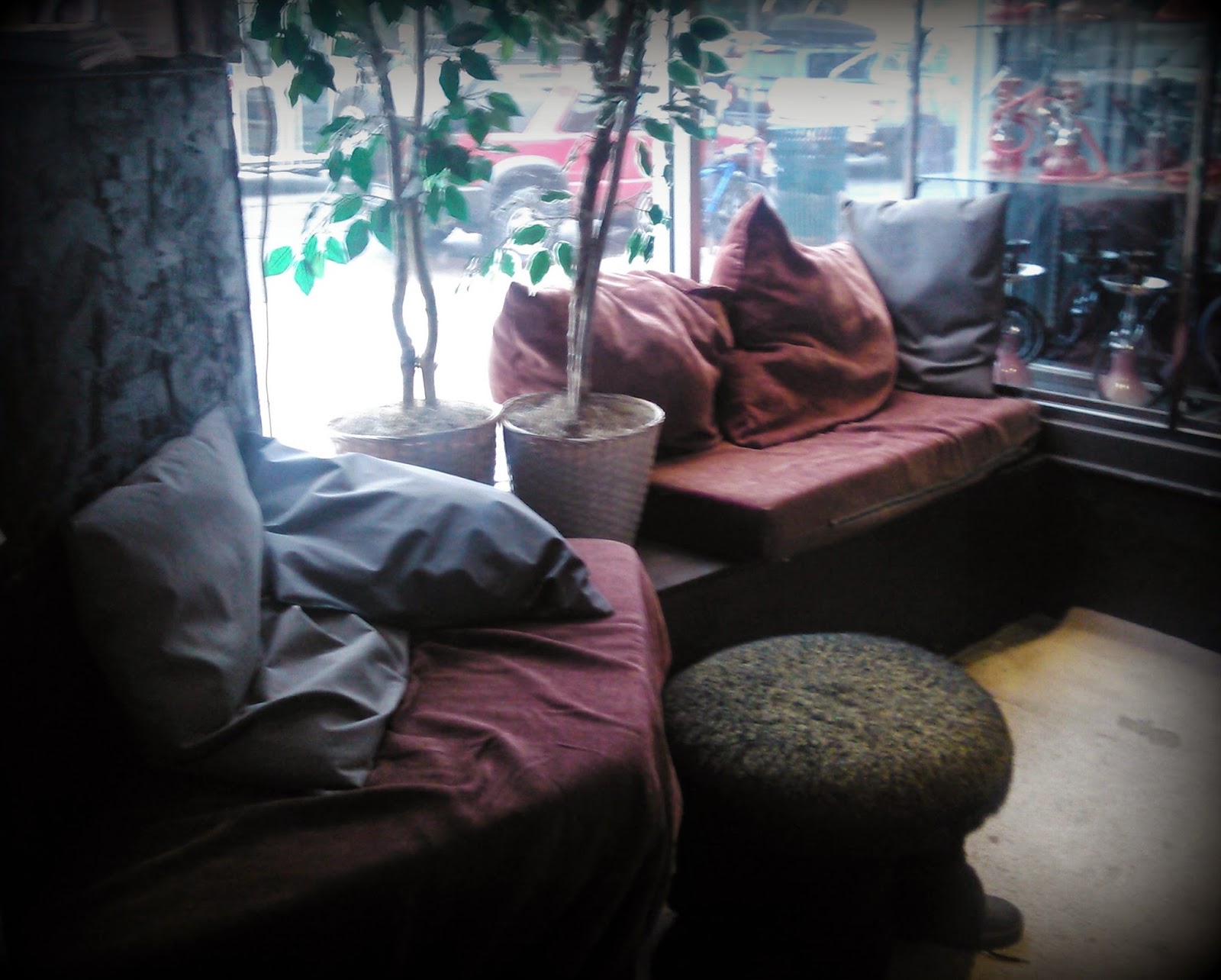 All images by Peggy