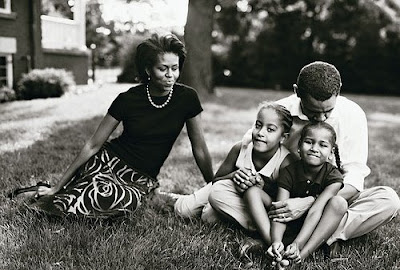 Creative Influences is happy to announce the 'Bama Blitz! When I say, 'Bama, you say Blitz. Why? Read on.
Now, I'm not prone to hype. But I am prone to hope. And naivete. I pretty much say things they way I see them, but I try to do it gently. No reason to be mean. Or loud. I've even been envied for this quality. It's nothing to be envied. I've been scared shitless throughout this whole experiment. I was terrified when I left my long comments at Apartment Therapy.

Now how does one go from being excited about President Obama to Apartment Therapy in one thought? One thing influences the other. Read on for the connection.

I'm no longer following AT daily, I peruse it briefly now and then. When I am perusing, I always wonder about their pronouns. They always use "We" instead of "I". Maybe I should starting using "We" instead of "I." "I" is so overused. Even though I don't follow AT much anymore, I delight when they receive accolades from the likes of Time Magazine. And, I delight seeing Maxwell's smiling face in my inbox every morning, with his condensed update. AT holds a special place in my heart, because they were the first. Yep, that's right. I had no idea what a blog even was the day I discovered AT. Blogs have saved me a lot of money. I don't buy nearly as many magazines, therefore, have considerably less paper.

I remember the first post I stumbled upon. Maxwell's aunt moved into a smaller place and freed herself from the oppression of too many books. It hit a nerve, I was going through a similar purge. One of my favorite things to write about is how I struggle with reconciling a love of stuff with a love of minimalism.

I never lurked - maybe I should have. I didn't know what I was doing. I dove in making comments. What a miracle! I discovered a whole new world I didn't know existed. Suddenly I was able to connect with people who shared my interests.

Sometimes I made people mad. It was unintentional, I thought it was all in fun and totally fell in love with the readers' passion for Home. Maybe I should have been quiet - but damn, I've been quiet too long. I angered ATers when I lambasted animal rugs (an opinion I hold strongly to - and no - I don't use leather). I even received a death threat for that one. I commented less, and toned down what I had to say - most of the time. I lavishly gave praise, and I freely gave advice. I've received numerous emails people wanting advice on design, art, decor and organization! How fun.

And let me tell you, I was scared shitless when I put my paintings on flickr. For the whole world to see. I must have schlepped those fuckers to galleries a million times. Only to hear no. After driving across town. When gas was $4.00 a gallon, I said, "Fuck it, who needs a middleman when you have the internet?" Now if that ain't democracy, I don't know what is.

The technology gives power to the people, voice to those who previously went unheard. And the technology is here to stay. The more I put myself out there, the more I received support from fellow bloggers. What a miracle. I now have the self-expression I longed for my entire life. And it wasn't about the money, I was expressing myself! I've been quiet too long. I am no longer afraid!

One day, I realized I didn't need to encroach on AT's blog. I could have my own! And - I can do with it I want. Now, if that ain't democracy I don't know what is.

Perhaps my degree in Communication isn't going to waste afterall. AT was using meta-communication techniques (that we learned about in COM101 and from Marshall McLuhan) to teach empathy. Whether they knew it not. They tapped into people's spirits - their homes. The Home is sacred in this time of acceleration and harriedness. ATers felt great pain when another's home was attacked. And they were loud about it. Sounds corny, I know, but consider this: AT reaches a HUGE world-wide audience. Now if that ain't democracy, I don't know what is.

But - the most important lesson AT taught me is that I could become a contributor in the political arena. For the first time in my life, my voice could be heard - and someone, somewhere will understand me. And damn, I've been quiet for too long.

But it took Obama to get me excited about politics. For the first time in my life, I was interested in politics! That's a miracle! I've never read the newspaper. I hate the ink. It stinks and gives me a headache. I hate the drone of television and the radio. But, I love the internet. I followed the election completely on the internet. I didn't have to pay attention to things that would get my blood pressure up, which is mostly what's on TV.

I read the Constitution and the Bill of Rights. I studied the economics of FDR and Lincoln. They didn't teach us that shit in high school. Shit, at that time they believed girls couldn't do math! Have you ever heard anything so stupid? I'm not lying! And they wouldn't let me-a-mere-girl-even-though-I-was-top-of-the-class, be traffic cop. Ouch. That was devastating. I wanted that stupid-orange-cape-with-the-badge so damn bad. I worked all year so I could get that damn cape and badge. I cried forever over that stupid thing. I didn't stop crying until my dad bribed me with some sparkly red shoes some weeks later.

I marched for Women's Rights. Most of the perceptions young people have of us are wrong. I won't go into a boring treatise on Feminism at this point. Suffice it to say that I jumped up and down when the next generation of girls were given the stupid-orange-cape-with-the-badge. And any kid anywhere, no matter what their gender - can have the stupid-orange-cape-with-the-badge and never be turned down again.

To Barack, Michelle, Malia and Sasha. I hold you dear in my heart, I pray for you each day and send you loving thoughts constantly. Something I have never done for a politician. I wish you only the best, and I commit to help you in the wonderful opportunities we have to make America a better place. I am full of hope, and I thank you for that. I have been jaded with politicians my whole life. This is a place I thought I would never be, and I thank you for that. When I say Go 'Bama - this is what I mean.

Email ThisBlogThis!Share to TwitterShare to FacebookShare to Pinterest
Labels: Obama

Peggy, I find it amusing (in a good, not-laughing-at-you-but-with-you way) how emotional you get about the new president. When we had our last elections, no one here really gave a damn, and I paid no attention to them (well, I never do). Tomorrow my team at work is going to the bar across the street to have lunch and watch the inauguration. :) Now THAT is amusing.

Kim, yeah, I know it is odd. It is the first time in my life that I gave a crap about politics. It's a miracle.

The day I become interested in Canadian politics will be a miracle too. I'm not holding my breath waiting for that day to come tho'. I know I should give a shit, but I'd rather read a shelter mag.