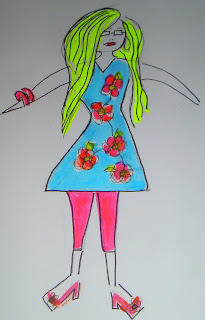 There once was a girl named Peggy, who really wanted to fly away. Since this seemed a little irrational, she made the very sane decision to obsess about the color orange instead.

She spent her days thinking about orange, which helped ease the agony of a grey cubicle. By night she mixed and mixed and mixed. But the perfect orange alluded her.

So she went to the trusty craft store - and found the orange of her dreams! She quickly took it home and breathlessly started applying it to a canvas in process. Now mind you, this was no ordinary bottle of orange paint. No indeed. This was a very free-spirited bottle of orange paint. Peggy applied the paint to a precise, mathematical piece she had been working on. But the orange paint would have no part of it - when she turned her back, it spilled all over the canvas.

Peggy was disappointed at first. But then she recalled her lessons around letting go of perfectionism, and had even written about that below. "Okay," she thought, "the canvas and the orange paint are conspiring to become something else." So she just went with it, reminding herself that she is merely a conduit.

Now that orange was feisty, and kept refusing to conform. Again it spilled, to Peggy's delight. She was really falling in love with that orange paint. The purple paint became jealous and spilled too. So what did Peggy do? She set them free. She poured the orange and purple onto paper. It was great fun! She had never been a fan of Jackson Pollock, but she began to understand how fun his work must have been.

She wasn't content just to pour, she decided to smoosh them too. The result - 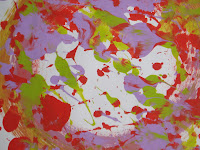 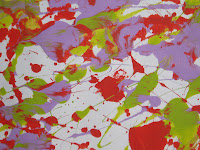 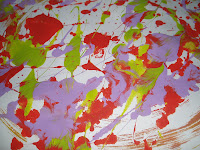 reminded her of those bullshit Rorschach ink blots, and the psychologist who had gotten mad at her because all she ever saw was butterflies. Although she saw hearts in these blots.

Undaunted, she continued to experiment with the orange. She thought of Autumn, her favorite season, and painted this: 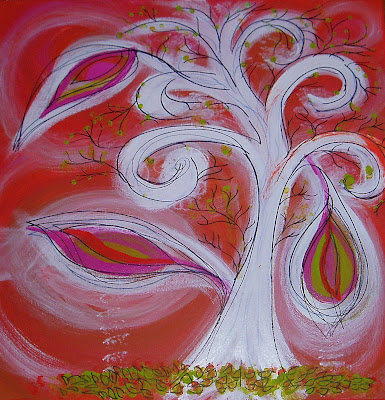 She has been seeing trees in her mind, with peacock feathers as leaves. And though she wasn't completely happy with her new painting, she was grateful to the orange for the lesson in being free-spirited and she knew that she would be working on series of paintings featuring trees.

It was clear she had to buy another bottle of the perfect orange. And then her thoughts turned to green...

Ooh I just love your art :) its so cool! The potrait of you is so fab! wish i could paint like that :9

I do not have a etsy shop yet, and those robots I do not feel like selling because they took a long time to make, cutting out glueing and stuff. But i do make paintings of them. I can put one of them on my blog later todday if you want ;)

The pic looks better on my blog becasue I use to light up som pics (old habit from school). Hope you do not mind. Really love your home and the freschness with the pink and white! :)

I been thinking of writing in english in my blog but then I will spell things terriblty ;)