Good Things are Happening in Cleveland

I took a mini vacay to my old stomping grounds in Cleveland last week and experienced a whole gamut of emotions. Somehow I took a wrong turn and ended up on Denison, a little south of my destination. Anyone who doesn't know what poverty is like (thinking of some politicians) should take a drive down Denison. I was in utter shock. I've only been gone for about two years, and it looked like a war zone. The streets and sidewalks were caving in. Buildings were being torn down, but many were simply falling down. The holes in the streets were so large I feared for my car. I literally drove about two miles per hour, it took me almost an hour to travel about 10 blocks. Poor people lined the streets, and many came up to my car. Presumably to beg for money, I was too chicken shit to roll down the window. I ached for my city. I've watched my city decay over the years, but this. This was something new. Decay mixed with criminal neglect. If I knew how to use my new Android phone, would have taken video, put it on YouTube and hope that someone notices. But it was not meant to be.

I almost turned around. But I didn't. I headed north, close to where I used to live. I intended to go to Gordon Square, which I hear is really happening. Instead I ended up a little west of there, and was pleasantly surprised to see some exciting shops sprouting up. This yellow reindeer caught my eye, so I had to pull over. 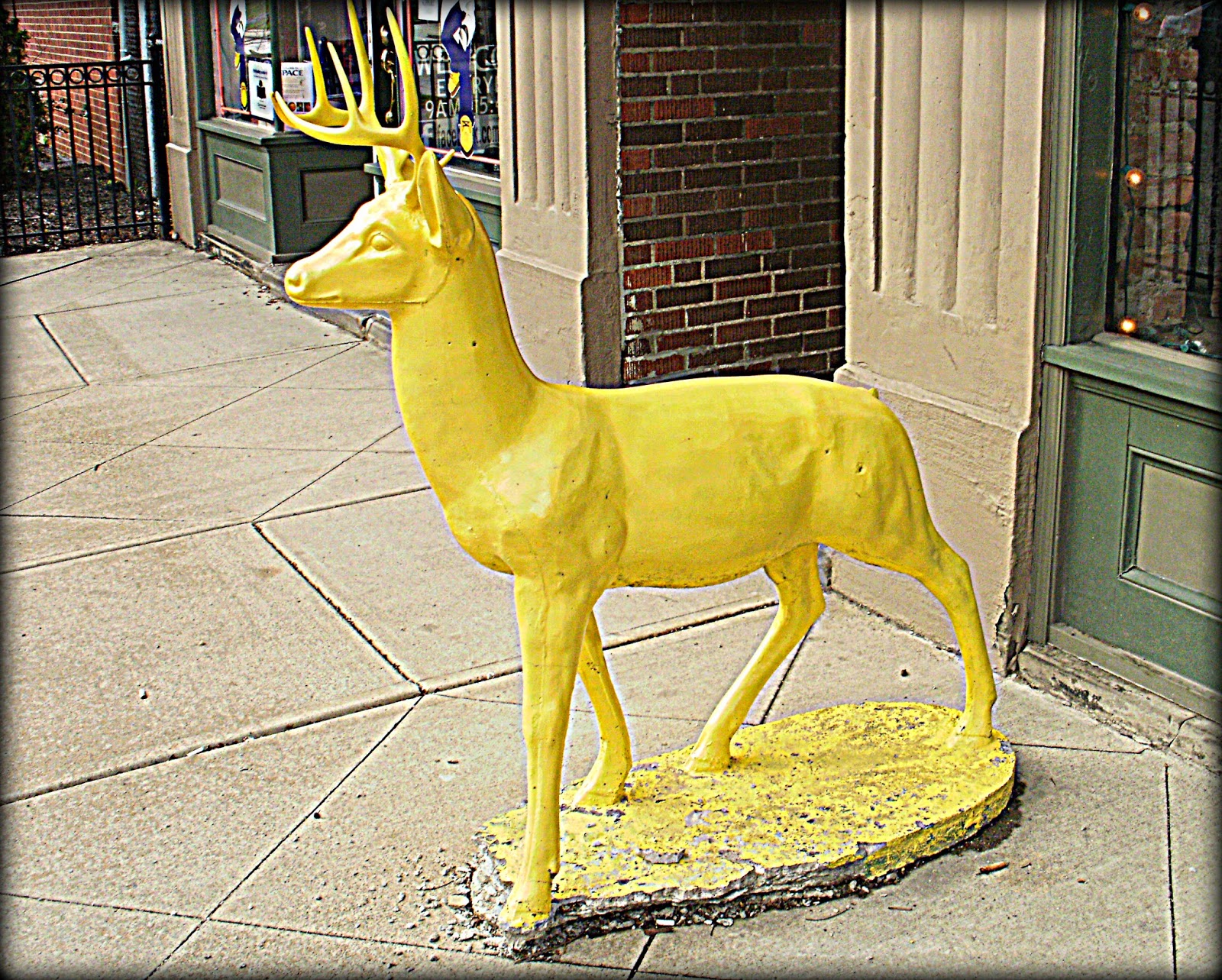 This cool fella is the mascot of an awesome store called Heck's Revival. I peeked in the window and had to go in. 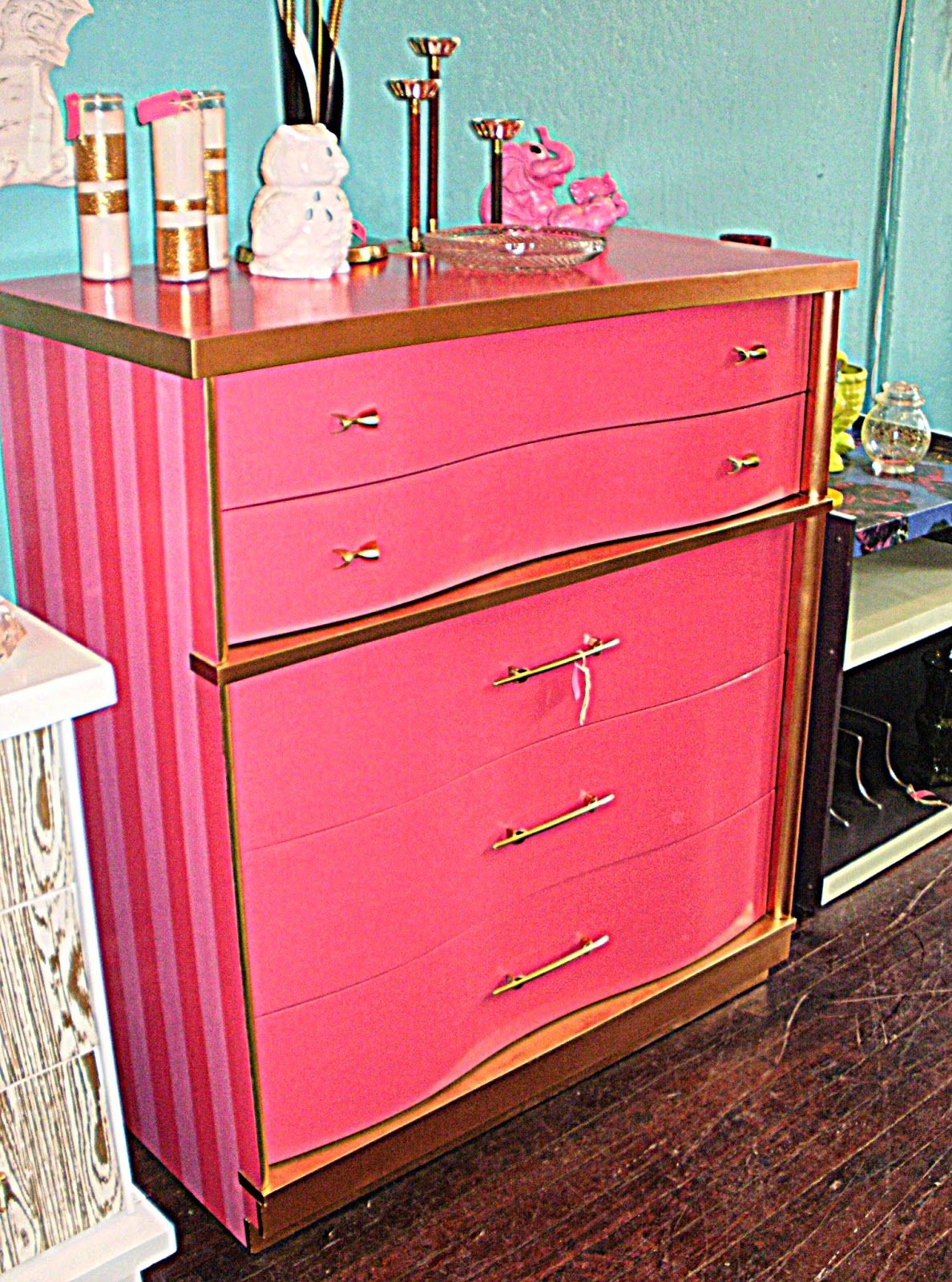 I almost peed my pants when I walked in this store. I didn't know where to look first! The owner and I are clearly kindred spirits - with a love of pink and turquoise. I used to paint furniture back in the day and dreamed of having a little store like this. But my skill level was no where near hers. I knew it was going to be tough getting out of there without spending money. 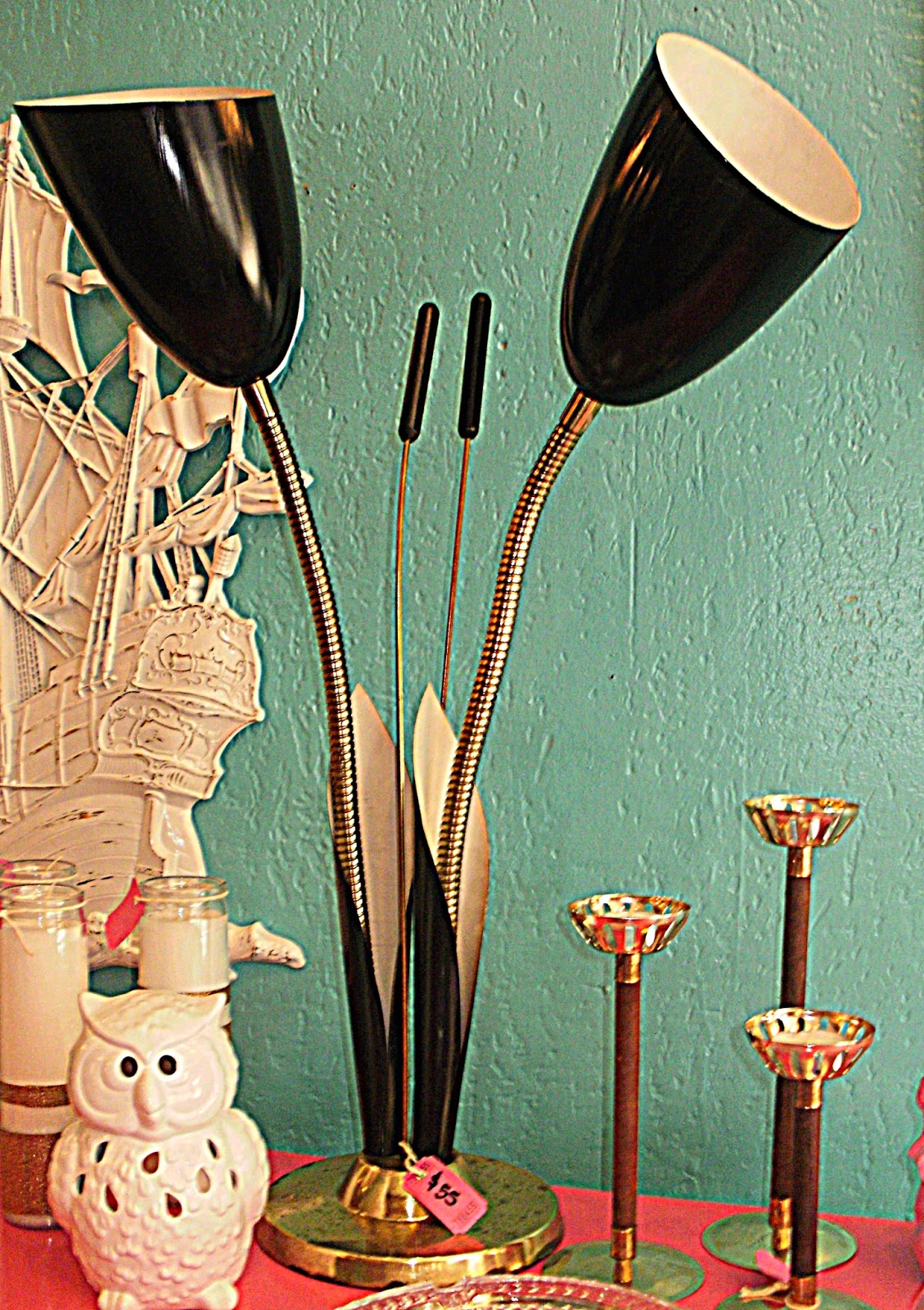 Isn't this lamp bitchin'? I really wanted it but resisted the temptation. Such a lamp tramp I am. And dig those turquoise walls. I wish I could paint an accent wall turquoise in my living room. 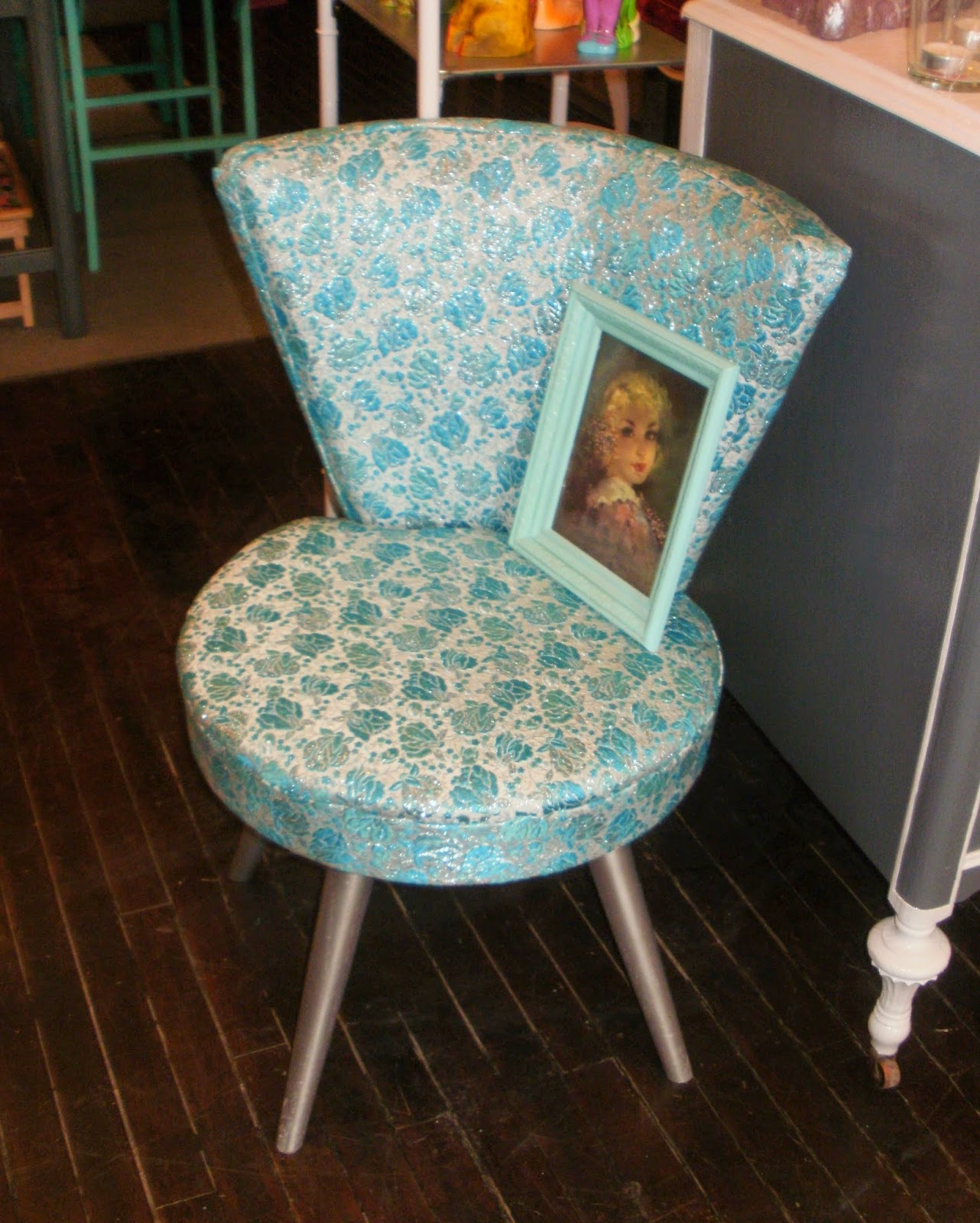 The owner is very talented. Not only does she paint furniture, but she also reupholsters. I love this little chair recovered in fabric from a vintage dress. 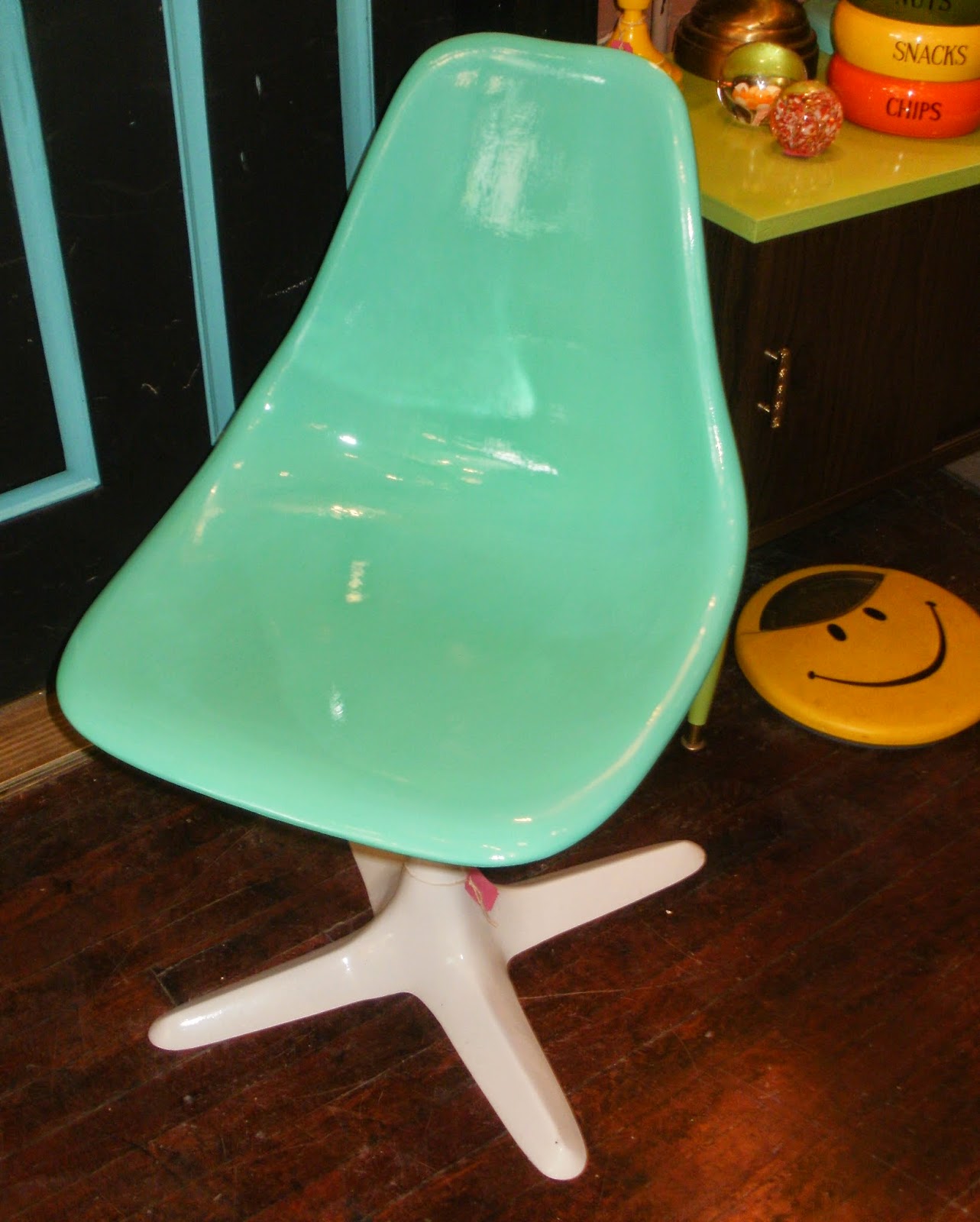 Check the Saarinen chair!  I think I need to have mine painted. 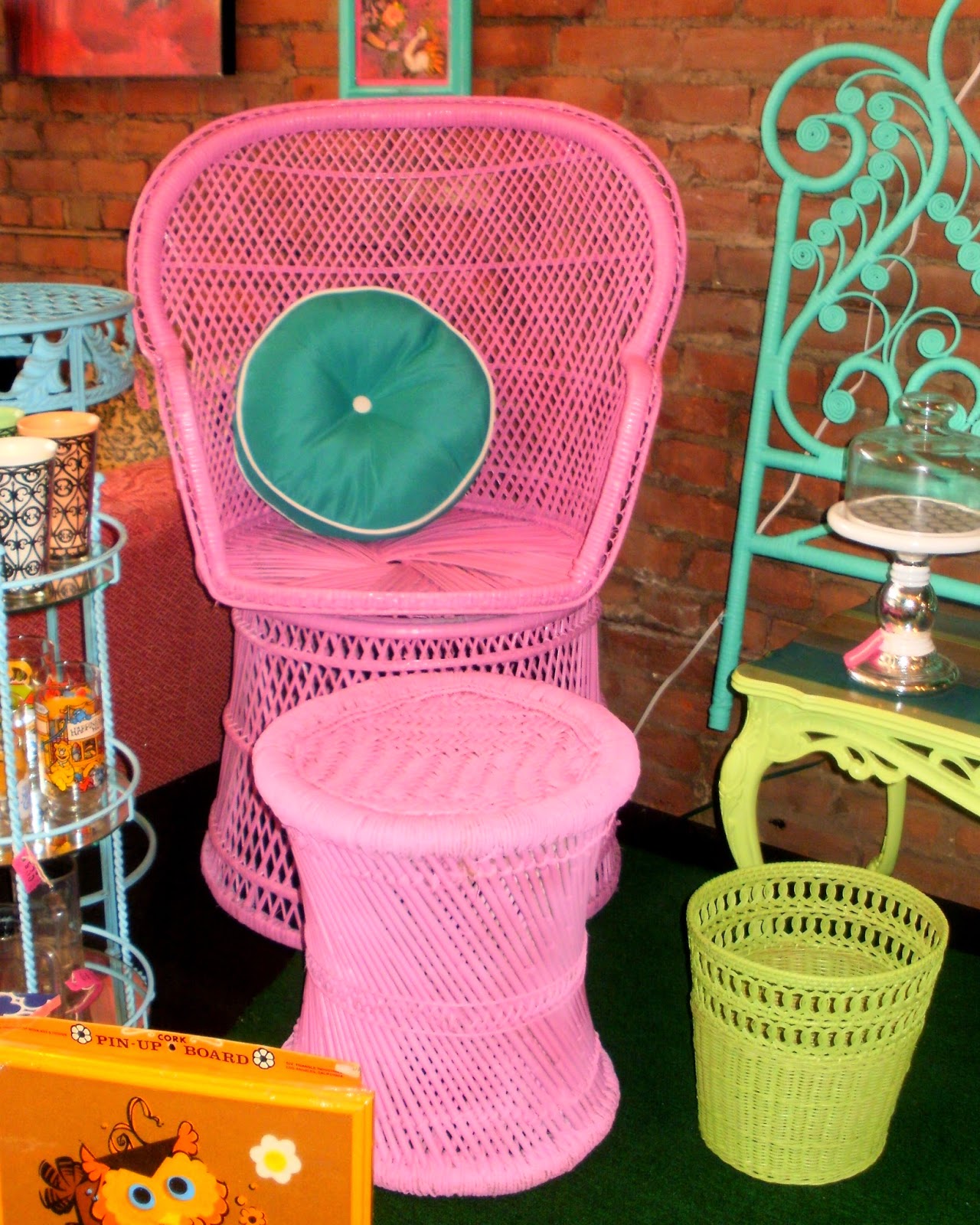 I've never seen a peacock chair looks as fabulous as this one.  I love it in pink! 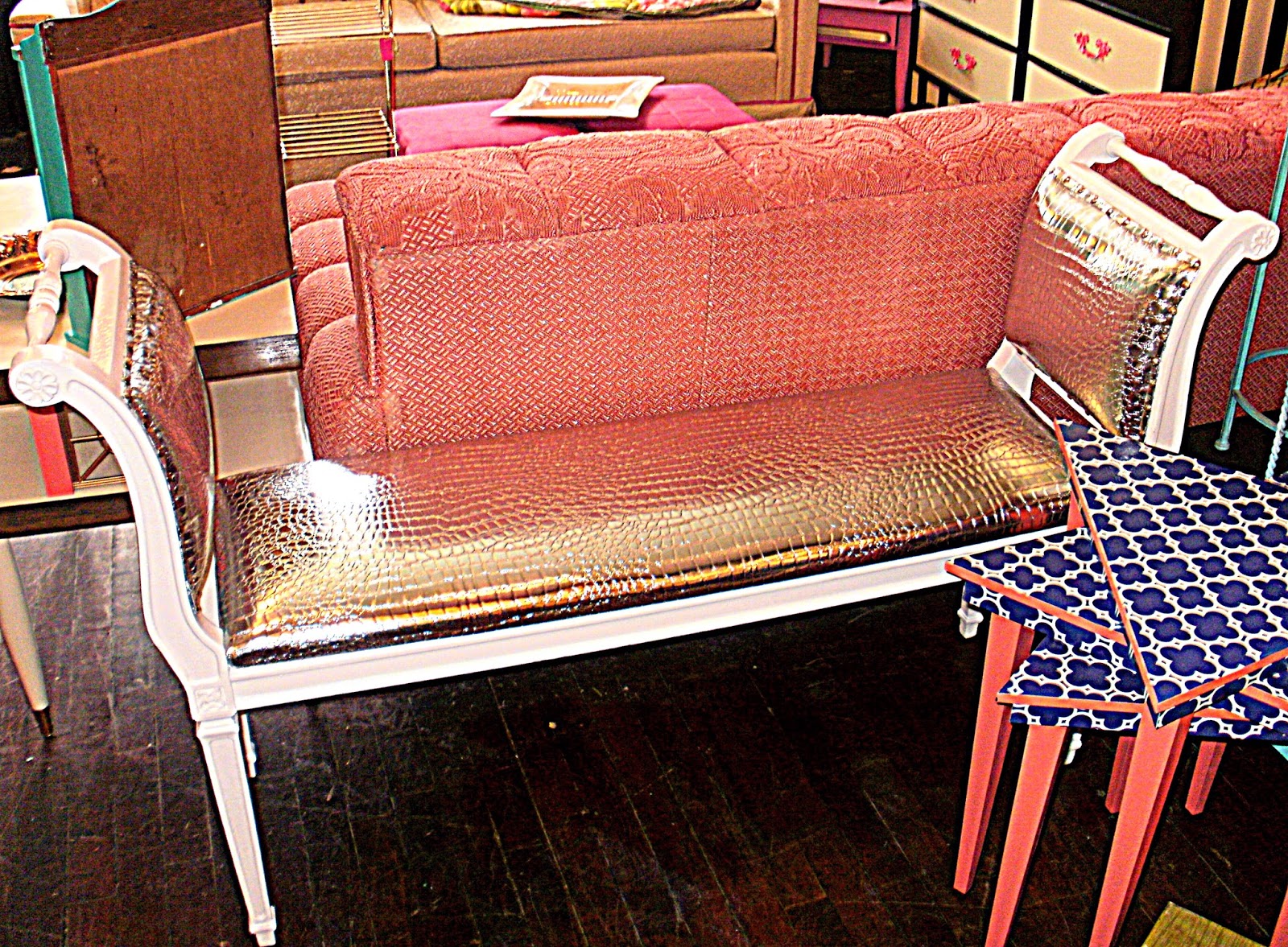 Cute bench reupholstered in shiny silver fabric.  I'd love to have this in my entry way! 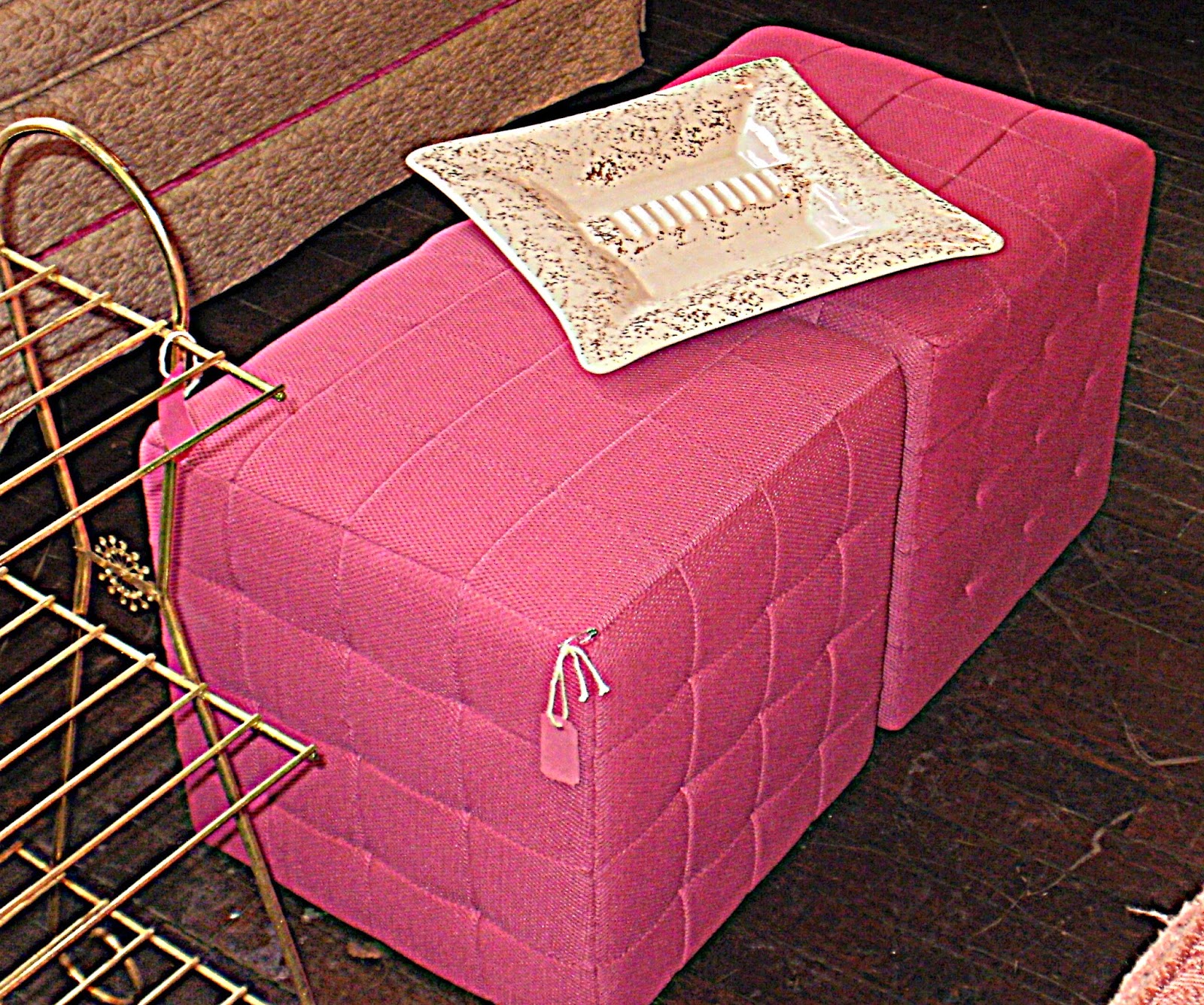 As you might have guessed, these bad boys went home with me. I couldn't help it. She gave me a good price.  Heck's Revival is a great place to get something fabulous for your home, and the owner is a sweetie. I had a lot of fun talking vintage furniture and color with her. 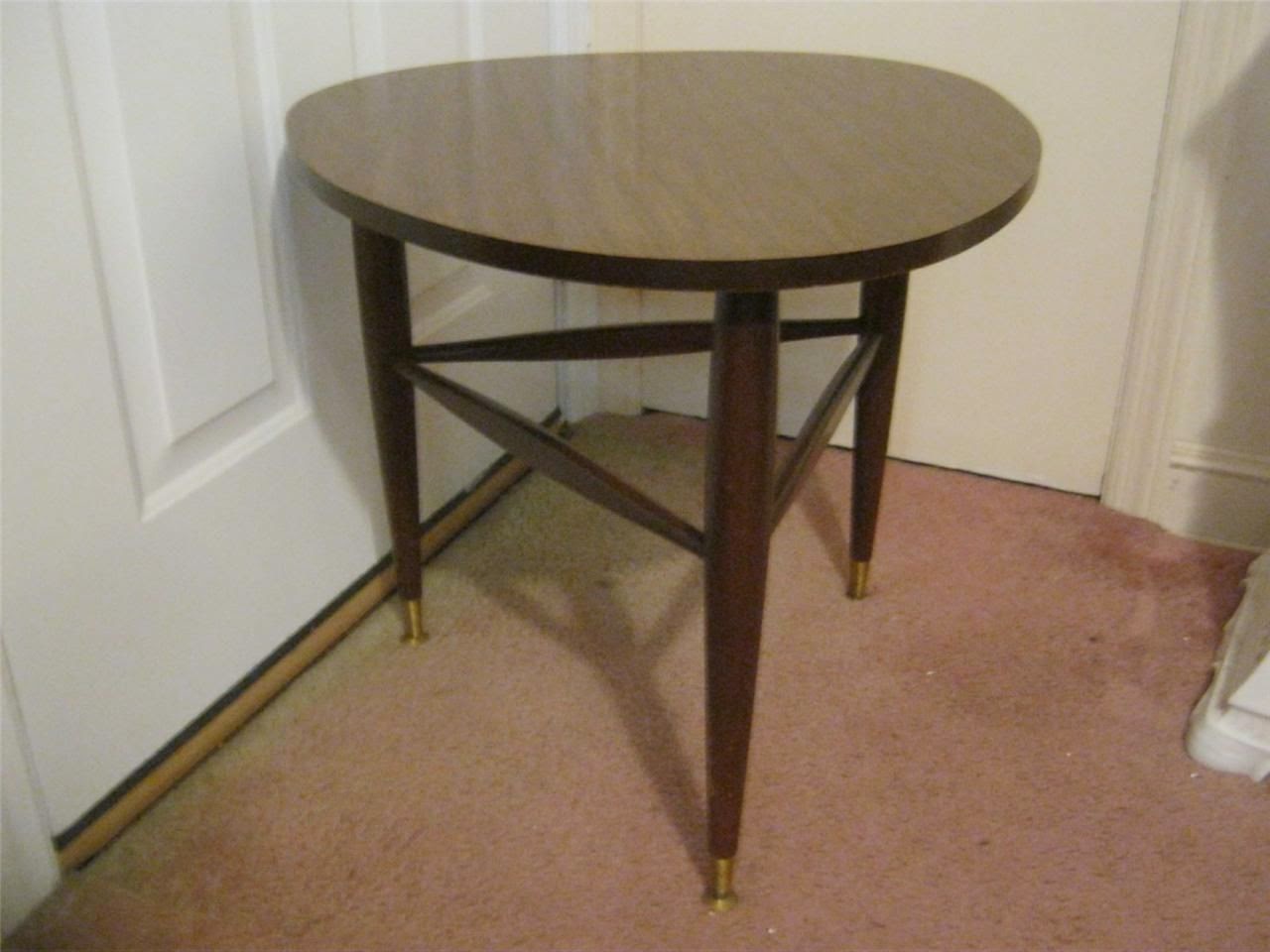 As it turns out I had a guitar pick table (like the one above) in the trunk of my car. I found this table on the curb! I had intended to sell it.  But when I attempted to sell the table to another dealer - the trunk wouldn't open! Upon seeing her custom work, I decided to have her paint it. And wouldn't you know, the trunk opened without a problem! Must be meant to be! I really love the shape of the table, but not the color. That's all I'm going to tell you, I'll keep it a surprise until it's done.

Next door to her shop is a Multi Cultural Barber Shop. That's what it said on the sign. I like that. The dude that owns the joint is cool and let me take his picture. I was excited to see vinyl by Grace Jones on his wall. 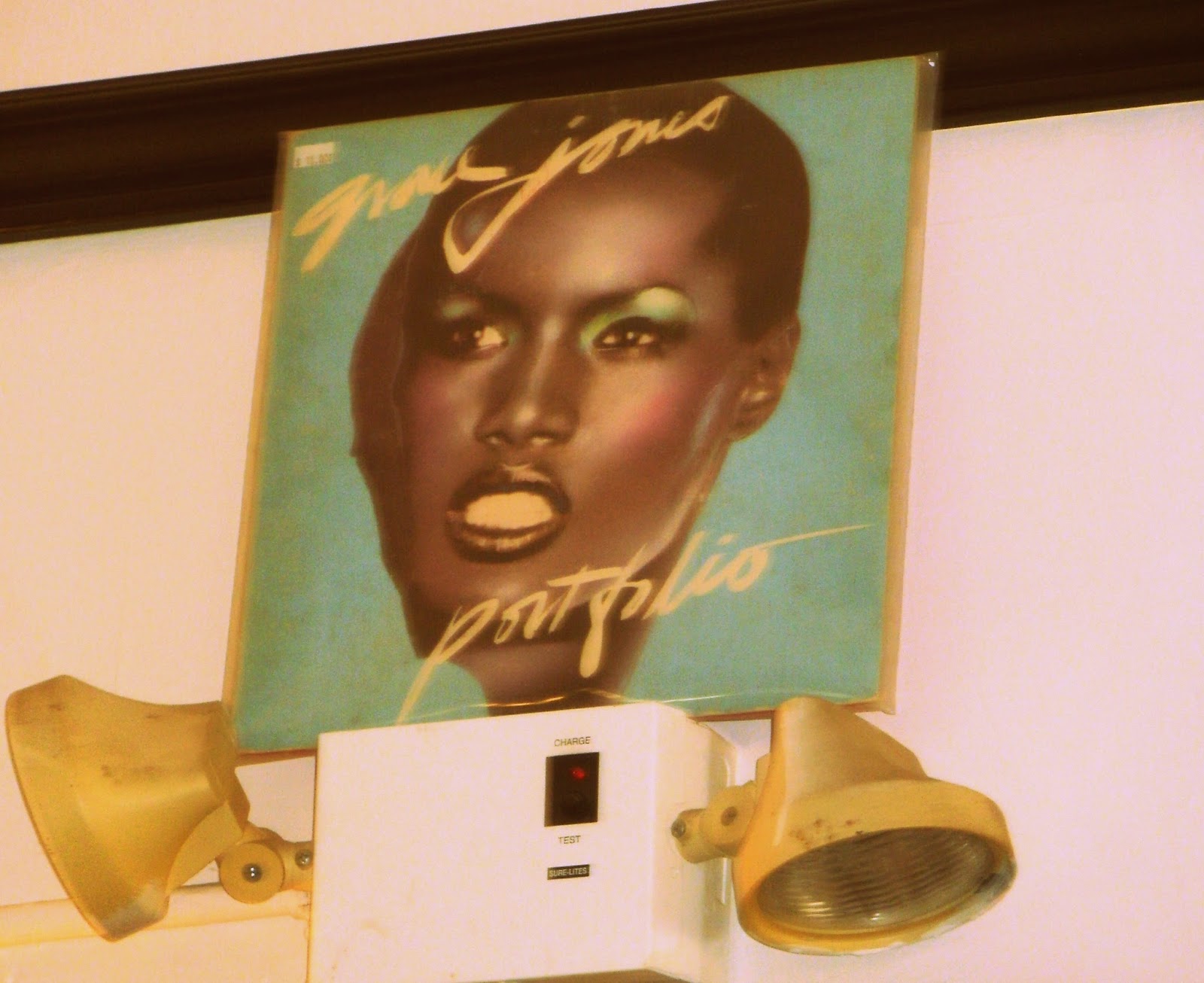 She is the shit. I miss my vinyl collection. I had a lot of fun talking to these cool peeps. Then I drove back to Akron feeling very grateful.

For photos of the barber shop, see my urban photojournal here.

For photos of post industrial decay that I also took that day, see my urban photojournal here.

What a cool shop. I'm so scared to recover things myself, but what a great talent that would be to have. It is very sad to hear about that part of Cleveland being that way. I've actually only been to Cleveland one time for a concert many years ago. I hate to hear of people being thrown away like that. :( I hope to volunteer at a soup kitchen in Portland.